Ireland has won the Eurovision Song Contest the most times out of any contestant, according to the competition’s official website. The country has won the event on seven separate occasions, and is the only country to have won three years in a row. Sweden follows in a close second place with six victories in total, succeeded by the UK, France, the Netherlands, and Luxembourg in joint third place with five wins each.

2020 marked the first year since the show began that there was no winner due to the show being canceled over the pandemic. In 2021, it was held in Rotterdam and was seen by 183 million viewers. This year the event will be held in the Italian city of Turin. Despite its name, any country in the world can apply to join the competition, so long as they are a part of the European Broadcasting Union. 40 countries will be taking part this year, including Australia, Morocco, Armenia, Israel and Cyprus.

Started back in 1956, Eurovision is supposedly a non-political event, which was created to bring different countries together in a post WWII world. Broadcasters and presenters are not meant to bring up political or commercial interests throughout the show. However, in reality, politics seep into the event each year, with countries voting for their neighbors based on a show of good will or shunning other countries by leaving them out of the running.

This year, Russia was refused entry to the contest, while Ukraine has been touted to win, with the bookies calling 44 percent odds in their favor, according to Eurovisionworld. The country has won the contest twice before, once in 2004 with "Wild Dances" by Ruslana and again in 2016 with the song "1944" by Jamala. Russia criticized the latter win for being too political, as it was about Soviet oppression of the ethnic Tatar people from Crimea. This was disputed by the European Broadcasting Union, who stated that Jamala could remain in the competition, tweeting on 9 March 2016: “the title & lyrics of the song don't contain political speech and don't breach Eurovision Rules.” 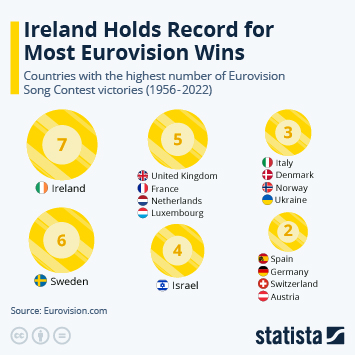 This chart shows the number of Eurovision Song Contest victories by country.