Published by Statista Research Department, Oct 7, 2022
The consulting industry provides professional advice to organizations in a variety of specialized fields. In 2020, the global consulting market was estimated to be worth approximately 132 billion U.S. dollars. After experiencing continuous growth between 2015 and 2019, due to the impact of the coronavirus (COVID-19) pandemic in 2020, the consulting market sector is estimated to have suffered a significant revenue loss across all service lines and segments.

Home of the big players

The United States is home to the largest consulting services market worldwide. It is unsurprising, therefore, that the United States is home to the most prestigious and successful consulting companies worldwide. According to those working within the industry, the leading consulting firm in terms of prestige in the United States in 2021 was McKinsey & Company. Other consulting firms in the ranking included the so-called Big Four accountancy and auditing firms - Deloitte, PricewaterhouseCoopers (PwC), Ernst & Young (EY), and KPMG, with Deloitte ranking the highest out of the four. Headquartered in New York, Deloitte is a professional services company with several service lines specializing in auditing, tax, consulting, enterprise risk, and financial advisory. In 2022, the firm's revenue reached approximately 59 billion U.S. dollars – over a third of which came from consulting.

The majority of the larger consulting and auditing firms operate on a global scale and have workforces the size of small cities, with offices located in dozens of countries worldwide. In 2022, for example, PwC had almost 120,000 employees in the Asia Pacific region alone. Despite this, other markets often bring in a smaller revenue than in the United States. Regardless of the market sizes, the consulting services industry is expected to grow steadily in the near future, with many companies already thinking about future business challenges that include the need for new skills, an apparent lack of top talent, and increased competition in the sector.

In the following 3 chapters, you will quickly find the 24 most important statistics relating to "Consulting services industry in the U.S.". 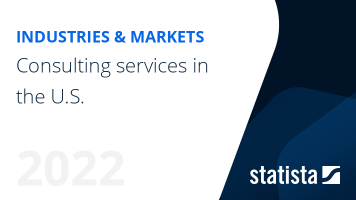 Go to report Consulting services in the U.S.
Top Seller

The most important key figures provide you with a compact summary of the topic of "Consulting services industry in the U.S." and take you straight to the corresponding statistics.

Accounting industry in the U.S.

Legal services industry in the U.S.

Security services industry in the U.S. 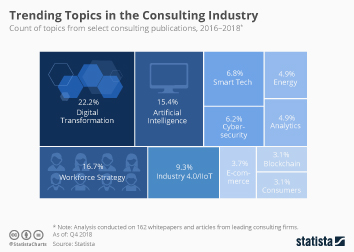