Published by
Aaron O'Neill,
Apr 1, 2021
The Republic of Iraq is a country in Western Asia, sharing borders with Turkey to the north, Iran to the east, Kuwait to the southeast, Saudi Arabia to the south, Jordan to the southwest, and Syria to the west. Located in the center of the nation, Baghdad is the country’s largest city by far, as well as its capital.
Iraq’s population is projected to grow steadily, adding an estimation of ten million inhabitants from 2013 to 2021. This increase is mainly due to the high fertility rate, as well as improved infrastructure and health care. The average life expectancy has been increasing slightly over the past years.

Due to the constant war surrounding Iraq, the exact number of the total population for certain years can only be estimated. In 2006 alone, there were over 29 thousand civilian deaths as a direct result of the war in Iraq. The war came as the Shiite Arabs ascended to ruling status. Sunni Arabs, led by Saddam Hussein, strongly opposed the Shiite’s rise to power and killed anyone in their way in order to overthrow the Shiite Arabs and rise to power. In 2003, the perceived threat of Saddam Hussein having acquired weapons of mass destruction led to an American occupation. In April 2003, the invading forces were able to overthrow Hussein’s regime. The conflict between the United States and Iraq came to an end in late 2011, when the United States withdrew much of its military personnel from Iraq.

Iraq’s economy is mainly supported by the oil sector. In 2016, Iraq had one of the largest conventional oil resources in the world, behind the Russian Federation, China, the United States, Brazil, Saudi Arabia, and Iran. Since the invasion of Iraq by the United States in 2003 and the removal of Saddam Hussein’s Ba’ath Party, the Iraqi economy has been growing. In 2017, estimated gross domestic product in Iraq amounted to around 193 billion U.S. dollars, recovering from a recession due to the drop in oil prices. Due to a growing economy, the inflation rate in the past four years has remained relatively low. Iraq's unemployment rate seems stable but high, consistently around 8 percent.

Iraq’s economic boost entails a positive trade balance, with a trade surplus of nearly 12 billion U.S. dollars in 2017 and had one of the 20 highest trade surpluses in the world in 2012. The country could not repeat it in the following years. However, it has been reporting a surplus ever since. With a rebounding oil price and an easing of political tensions, Iraq should continue to see positive developments.

In the following 5 chapters, you will quickly find the 44 most important statistics relating to "Iraq". 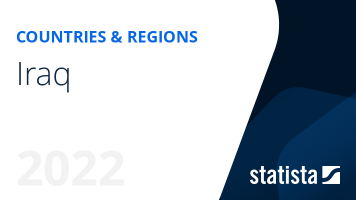 The most important key figures provide you with a compact summary of the topic of "Iraq" and take you straight to the corresponding statistics. 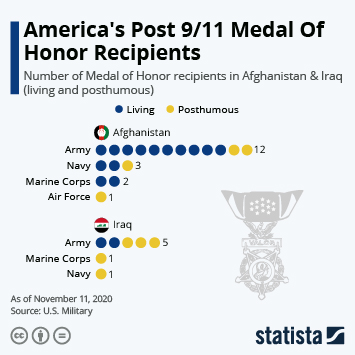 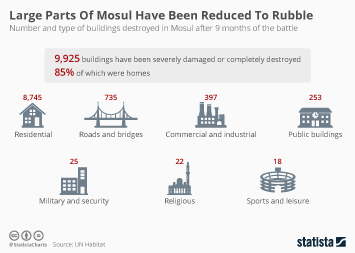 Large Parts Of Mosul Have Been Reduced To Rubble