Madagascar is one of the largest island nations, located of the coast of Southeast Africa in the Indian Ocean. Its remoteness has made the island one of the most diverse and biologically rich nations worldwide,with most of the islands animals and plants being unique to this ecosystem, and it has the potential to be a unique destination for nature loving tourists. One of the world’s largest coral reef areas can also be found in Madagascar. However, almost 90 percent of the nation's coral reef area is threatened due to increasing human pressure in combination with the effects of a changing climate. Considering that many inhabitants depend on the reef for their livelihood, as a source of both income and nutrition, this poses an increasingly bigger problem. While biologically rich, Madagascar is also extremely poor and its people are among the most-affected by hunger and malnutrition worldwide. Further challenges include tropical cyclones, heavy rains and flooding, but also political instability.
Considering its limited and confining island characteristics, Madagascar’s population continues to grow at alarming rates, placing increasing demands on the island and its resources. The fertility rate was as high as 4.03 children per woman as of 2019, despite a decrease over the last ten years, and more than 40 percent of the population is under 14 years of age. While the island is still predominantly rural, the largest city and capital of Madagascar is Antananarivo, hosting over one million inhabitants.

Madagascar is still in the midst of overcoming a political crisis. While a new president was democratically elected in 2014, concerns about political corruption still exist, and attempts have been made to impeach him. It seems as if the political and economic crises of earlier years will continue. However, for the time being, the economy seems to be improving. Except for 2020, the GDP growth rate has been increasing since 2010 and with that, slight improvements to GDP per capita have been made, and hopefully these gains can stabilize over the next few years. Yet, inflation remains a problem, directly affecting inhabitants and their ability to purchase food. While a large portion of GDP comes from agriculture, the demand for agricultural land and the nutritional needs of the country are in direct competition with preservation goals and tourism. Preserving the biological diversity - one of the country’s most precious resources – will be a challenge given the political and economic climate – especially when conditions of widespread hunger and malnutrition exist.
This text provides general information. Statista assumes no liability for the information given being complete or correct. Due to varying update cycles, statistics can display more up-to-date data than referenced in the text.

Madagascar and the coronavirus 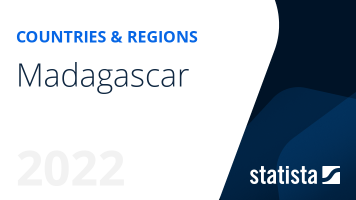 The most important key figures provide you with a compact summary of the topic of "Madagascar" and take you straight to the corresponding statistics.