The Republic of Rwanda is located in central East Africa, bordered by Uganda to the North, the Democratic Republic of the Congo to the West, Burundi to the South and Tanzania to the East. The capital of Rwanda is Kigali. With a population of approximately 860,000, Kigali is also by far the largest city in the country.
In total, Rwanda's population approximately amounts to an estimated 12 million and is predicted to increase steadily. However, the country maintains a very low degree of urbanization; only about 29 percent of Rwanda's population live in cities or urban areas. This low percentage could be due to the poor living conditions in Rwanda's urban areas, considering that in 2010, the United Nations reported that 65 percent of the Rwandan urban population lived in slums - the highest percentage of any country around the world. Population growth within the country has begun to decrease slightly, as has the fertility rate - although it is still considered quite high. Rwanda’s life expectancy is one of the worlds’ lowest, highlighting that there is still a lot more work that needs to be done in order to improve the situation of those living in the country.

Rwanda suffered heavily during the 1994 Genocide, which saw about one million people killed, injured or tortured in an attempt to eliminate the Tutsi population. Exact figures of victims are not available, most estimates state casualties and victims in the vicinity of the one-million mark. The Genocide did not only devastate the country in terms of population and social stability, it also had severe economic consequences, from which the country is still recovering.

The services sector accounts for half of the country's GDP. The country’s most important import partners are its closest neighbor Uganda, Kenya, and China. The most important export partners include neighboring Democratic Republic of the Congo and, again, Kenya. Both exports and imports are on a good path, however, the country has been reporting a growing trade deficit for the past few years, meaning they import significantly more than they can export.
This text provides general information. Statista assumes no liability for the information given being complete or correct. Due to varying update cycles, statistics can display more up-to-date data than referenced in the text.

Total population of Rwanda 2021, by gender

Rwanda and the coronavirus 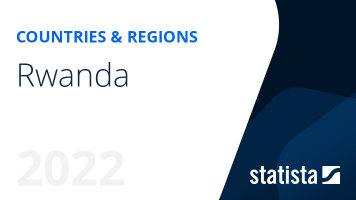 The most important key figures provide you with a compact summary of the topic of "Rwanda" and take you straight to the corresponding statistics.