Use of cloud in the UK

Among the most prominent cloud providers are Amazon Web Services (AWS), Microsoft Azure, and Google Cloud. Each of these vendors has managed to partner up with notable businesses in the UK in the past. Among AWS’ notable customers are large organizations like BP, as well as Deliveroo. Microsoft had been successful in striking deals with Rolls Royce and Centria, whereas Google Cloud managed to attract Sky TV and HSBC as their customers.

Further, SaaS is the largest segment in the UK public cloud market with approximately 8 billion U.S. dollars in revenue in 2020. Accordingly, cloud services usage has increased over the years in the United Kingdom, especially in the younger demographics. Overall, cloud services are most popular for the online storage of files and online applications to create office documents.

Public sector cloud in the UK

Private organizations are not the only ones looking to invest in cloud computing. The UK government has also been spending a sizeable amount of money on its cloud infrastructure, with a total of more than 1.3 billion British pounds in 2019. This amount has more than doubled since 2015. Even though the vast majority of public organizations are using or will use cloud services in some form in the future, there are some knowledge gaps in what data organizations are running and storing in their clouds. Notably, this hints at a lack of skill of IT professionals in organizations to manage cloud applications sufficiently.
This text provides general information. Statista assumes no liability for the information given being complete or correct. Due to varying update cycles, statistics can display more up-to-date data than referenced in the text.

Cloud service usage in the UK 2022

Cloud service usage in the UK 2022 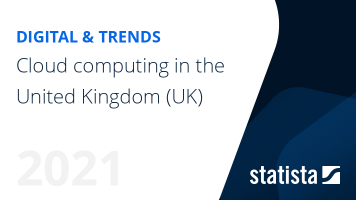 The most important key figures provide you with a compact summary of the topic of "Cloud computing in the United Kingdom (UK)" and take you straight to the corresponding statistics.