Cloud computing utilizes remote data centers to store, access, and process data over network connections, which significantly reduces the computing power necessary on the users' computers and increases the mobility and flexibility of work processes. The technology is being rapidly developed in various sectors and is already generating over five billion dollars in revenue annually. Generally, three main types of business models exist in the cloud computing industry: Software as a Service (Saas), Platform as a Service (Paas), and Infrastructure as a Service (Iaas).

Growth across the board

Typically, the Saas segment dominates the cloud computing market in countries like the United States for example, but this is not the case for China. IaaS accounts for almost double of the Saas segment at around 66 percent of the Chinese market. Infrastructure as a service includes servers, information data centers (IDC), and content delivery networks (CDN). Together, the size of the industry reached almost 90 billion yuan and was dominated by Chinese companies that accounted for at least 80 percent of the market. Out of the Big Four tech companies, Alibaba Cloud was the industry leader. For its holding company, Alibaba Group, cloud computing constituted the second-largest revenue segment.

Being the second biggest segment in the market, Saas's market size grew from almost 3.5 billion yuan in 2013 to over 50 billion in 2020 in China. On the background of the high growth in the past years, likely, the software segment will quickly catch up to the Iaas market. Especially China’s investments into artificial intelligence are going to boost the capabilities of AI-powered Saas solutions.

Companies have experienced major upsides by using cloud computing technologies in China. Advantages were improved efficiency of IT operations and reduced workload of IT maintenance, as well as significant saving of IT expenses. Given the benefits brought by switching to cloud applications, an increasing number of companies have started the transformation. However, around 34 percent of the companies in China were still not applying cloud computing in 2019 which demonstrates the significant growth potential of the industry.

Among all the industries in China, the manufacturing and finance sector were the two with the highest penetration rate of Saas. Along with the increasing capabilities of cloud applications and with home office gaining popularity as a global phenomenon as a consequence of the coronavirus outbreak, the future of cloud computing is promising.
This text provides general information. Statista assumes no liability for the information given being complete or correct. Due to varying update cycles, statistics can display more up-to-date data than referenced in the text.

Number of secure internet servers per one million inhabitants
954.5 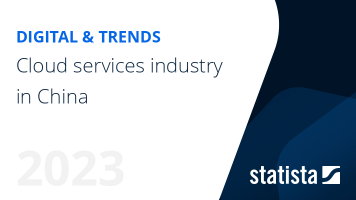 The most important key figures provide you with a compact summary of the topic of "Cloud computing in China" and take you straight to the corresponding statistics.