Hog and pig farming is a branch of animal husbandry that involves the raising and breeding of pigs domestically and principally for food. China leads by far in the worldwide production of pork, with around 40.5 million metric tons of pork produced in 2021 alone—nearly 15 million more than the amount produced in the EU. The United States is third in global pork production, producing around 13 million metric tons in that year.

Pig farming in the U.S.

In hog and pig farming in the U.S., the animals are allowed to roam freely, raised in a homestead or bred within intensive commercial units in an industrial farm system. The number of hogs and pigs kept for breeding in the U.S. amounted to above six millions and about 120 million hogs are slaughtered annually in the United States. As of March 2021, Iowa had an inventory of about 24.6 million hogs and pigs, making it the top producer of swine in the country by a large margin. In that same year, the second largest producer of hogs and pigs was Minnesota, with about 9.3 million head. The state of Iowa is by far the leading producer of hogs in the United States with a live weight production of hogs of approximately 14.5 billion pounds. Concentrated animal feeding operations (CAFO) in the U.S., using hogs and pigs, has continued to generate a lot of concerns public health and waste management concerns as well as elicit very strong criticisms from animal welfare activists.

In 2021, the market capitalization of Tyson Foods amounted to approximately 28.2 billion U.S. dollars worldwide, making the company the leading meat producer globally and overtaking competitors such as Hormel and Pilgrim's Pride. Based on sales revenue, JBS was the largest meat processing company in the world with sales amounting to around 50 billion U.S. dollars in 2019/2020. Tyson Foods came in second place, with sales reaching more than 42 billion U.S. dollars in that year. It is predicted that the global consumption of pork will increase continuously and will amount to around 127 million metric tons by 2030.
This text provides general information. Statista assumes no liability for the information given being complete or correct. Due to varying update cycles, statistics can display more up-to-date data than referenced in the text.

M. Shahbandeh
Research expert covering agriculture & FMCG
Get in touch with us now
Published by M. Shahbandeh, May 27, 2022

Leading country, based on number of pigs
China

Number of pigs worldwide 2022, by country

Number of pigs worldwide 2022, by country 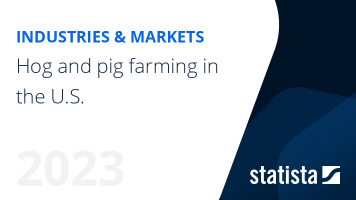 Go to report Hog and pig farming in the U.S.
Top Seller

The most important key figures provide you with a compact summary of the topic of "Hog and pig farming" and take you straight to the corresponding statistics.