Published by Statista Research Department, Feb 7, 2022
The Internet has become a fundamental feature of both households and firms, used for all purposes, from business to leisure. Broadband access offers the possibility of transmitting data faster than traditional accesses and Italy is implementing usage of it. As of 2016, 77 percent of households have broadband internet access in Italy.
In Italy the major player in terms of market share is Telecom Italia, holding 45.9 percent of the market and providing the most expanded network in the country. Concerning revenues, Telecom Italia is leading, followed by the other major players Fastweb and Wind3.

Recently, the Italian government adopted a strategic plan in order to develop an effective telecommunications infrastructure throughout Italy. The plan aims to spread broadband connections up to 100 Mbps across public facilities, premises and industrial areas by 2020. As of today, 30 Mbps and 100 Mpbs speeds are available in major cities such as Milan, Rome and Palermo. In the end, Italians rate their internet connection as satisfactory while only 12 percent of respondents to a survey in 2015 reported that it is very satisfactory.

In the following 3 chapters, you will quickly find the 18 most important statistics relating to "Broadband in Italy". 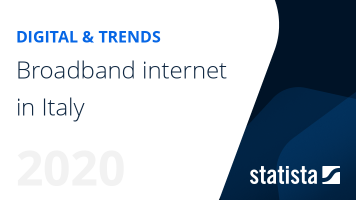