Published by
Jennifer Rudden,
Jun 20, 2022
Metropolitan Life Insurance Company—more commonly referred to as MetLife—is a global provider of insurance, annuities, and employee benefit programs. The company was founded in 1868 and has since grown to become one of the leading global life and health insurance companies worldwide, with total revenues of approximately 71 million U.S. dollars in 2021 alone. In that same year, MetLife’s profit was the highest of stock life and health insurance companies in the United States, amounting to a value of over five billion U.S. dollars. The company’s principal office is located in New York City’s Midtown Manhattan.

What products do MetLife offer, and where?

MetLife offers a diverse range of products which includes home, car, and life insurance as well as commercial mortgages and securities. Other products and services offered by MetLife include critical illness insurances; fee based financial planning, wealth management, as well as the provision of retirement plans. It was the second largest life insurance company in the United States in terms of assets in 2020. The United States also accounted for the majority share of MetLife’s operating earnings in 2021.

The total expenses of MetLife in 2021 amounted to almost 63 billion U.S. dollars, while net income in that same year exceeded six billion U.S. dollars. MetLife’s total stockholders’ equity for 2021 was approximately 67 billion U.S. dollars. However, earlier years saw higher income: In January 2016, MetLife announced the formation of an independent spin off retail business named Brighthouse Financial focused on life insurance and annuities, which then completely separated from MetLife in March 2017.

In the following 5 chapters, you will quickly find the 26 most important statistics relating to "MetLife". 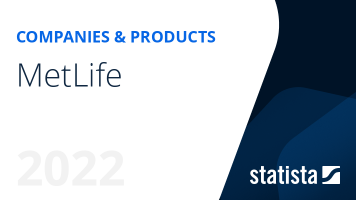 The most important key figures provide you with a compact summary of the topic of "MetLife" and take you straight to the corresponding statistics.