Published by
Tanushree Basuroy,
Apr 6, 2022
Private equity and venture capital have played the role of a lucrative springboard in providing growth capital for Indian businesses. In just the last few years, these two alternative investment channels have moved from a ten-billion-dollar opportunity to almost 50 billion dollars in 2019 and 2020.

What’s the difference between private equity and venture capital deals?

Private equity and venture capital investments mark a big trend within the finance sector, especially in the United States. Common to both forms of investment is that an investor obtains equity in a private (and therefore not publicly listed) entity. The decision to make an investment is generally made under purely financial considerations aiming to a beneficial exit. In private equity, mostly large institutional investors buy at least the majority of shares of an already matured company and try to make it more profitable. In contrast, venture capital investors finance start-ups and small businesses from the technology sector. As this is more risky, the percentage of acquired shares is much lower and many investors spread their investments into different start-ups. The attraction of venture capital is particularly important for those start-ups that do not have access to debt instruments.

The rise of PE/VC investments in India

While the concept of private equity and venture capitals were present in India in many forms since the 1960s, the industry saw growth mainly after economic reforms in 1991. The vibrancy and rapid growth rate of the industry has attracted global as well as domestic attention in the last decade. Even though there were no deals negotiated in April 2020 due to the coronavirus (COVID-19) pandemic, funds raised through PE and VC valued over eight billion U.S. dollars in 2020. Similarly, the number of large deals beyond 100 million U.S. dollars remained high.

Preferences for funding and exits

During the last decade, start-up funding was very popular among PE/VC investments. Thereby, tech start-ups attracted over 800 deals during this period, followed by e-commerce start-ups at nearly 740 deals. Nevertheless, it was the hospitality start-up OYO Rooms which received the highest value of start-up funding during that time. The best year for PE/VC exit deals had been 2018 with deals valuing over 27 billion U.S. dollars. Since then, the value decreased, whereas, the number of exit deals remains stable.

In the following 5 chapters, you will quickly find the 23 most important statistics relating to "Private equity and venture capital in India".

The most important key figures provide you with a compact summary of the topic of "Private equity and venture capital in India" and take you straight to the corresponding statistics. 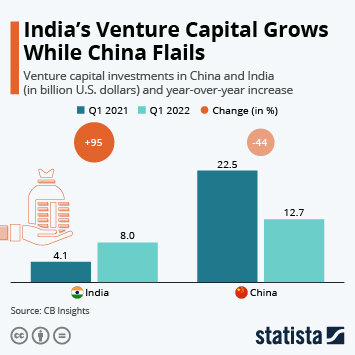