Published by
Tanushree Basuroy,
Jun 27, 2022
While India is one of the fastest growing economies in the world, it has also emerged as one of the top destinations for foreign direct investments. A large consumer base, growing disposable incomes and an improving index for ease of doing business are some of the key drivers in the evolving global preference for investing in India.
Indeed, foreign direct investments are an important driver of a country’s economy since they boost the job market, technical knowledge base and provide non-debt financial resources. Over the years, successive governments in India have understood this potential from overseas investments and liberalized FDI policies. Furthermore, tax exemptions and automatic routes for foreign investors pose a lucrative offer for investing in the country. Consequently, FDI inflows into India have seen a significant increase over the last decade.

In financial year 2022, the foreign direct investment equity inflow to India was valued at nearly 572 billion U.S. dollars. The computer hardware and software sector constituted the largest part of the inflows, with an overall amount just under two trillion Indian rupees for fiscal year 2021, replacing the services sector. Overall, the country saw the highest-ever FDI inflow in fiscal year 2022 at over ten billion U.S. dollars, of which Singapore has been one of the top investors. However, investments from other countries in 2021 have seen a slight decline compared to 2019.

Evidently, India's efforts to increase FDI inflows through various policy and financial reforms in the investment processes seemed to be working in the country’s favor since the share of FDIs grew by 13 percent in 2020. In that year, India continued to rank among the top 20 host economies for FDI inflows. Despite the overall decline in global inflows in fiscal year 2020, a little under 500 billion dollars of global FDI came from the developing Asian region, including India.

Among overseas investments made by Indian companies, the oil and natural gas sector seemed to be faring well with several key offshore investments in almost 18 countries. In fact, in 2016, the United Kingdom announced that India had become the third largest source of FDIs for them in the preceding fiscal year, as investments from India increased by a whopping 65 percent.

In August 2019, India further opened its FDI policy by loosening the grip on sourcing requirements for various sectors. The government also allowed 100 percent FDI in previously tightly controlled sectors like commercial coal mining and contract manufacturing in a bid to diversify its supply chains. However, many analysts believe that these are desperate measures to stimulate India’s ailing economy and may not have long-term benefits to the country’s own businesses.

In the following 4 chapters, you will quickly find the 19 most important statistics relating to "Foreign direct investments in India".

The most important key figures provide you with a compact summary of the topic of "Foreign direct investments in India" and take you straight to the corresponding statistics.

Foreign property investment in the U.S. 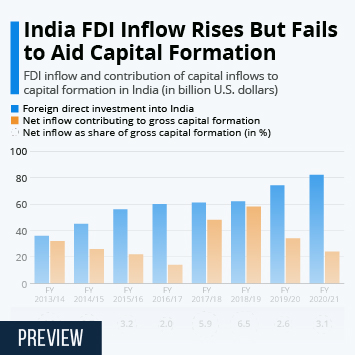 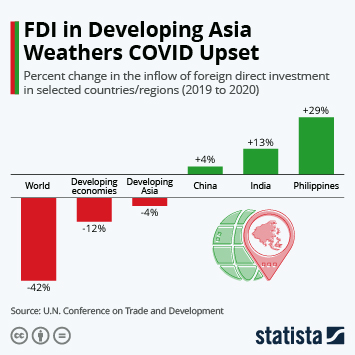