Published by L. Yoon, Sep 12, 2022
In South Korea, the first big startups became successful in the 1980s with the development of computer technology and increase in internet coverage. However, the recession in the early 2000’s struck the then booming dot com bubble. The government and stakeholders at different levels provided significant support for self-employed to create a more business-friendly society. As a result, the number of startups has risen sharply over the past ten years.

The South Korean startup scene has experienced exponential growth in recent years, supported by strong venture capital funding and government financing programs. The number of new businesses has almost doubled in the last ten years, while the number of technology-intensive SMEs, known as venture companies, grew from about ten thousand in 2005 to around 39 thousand in 2020. In 2021, South Korea had a total of 18 unicorns, including the fintech startup Viva Republica, which operates the digital payment platform Toss, and Kurly, one of the most widely used grocery delivery services in South Korea.

The South Korean investment market has also grown substantially, and this has been a key driver in the growth of startups. Especially, venture capital has played an important role when it comes to companies that have technological prowess but are difficult to raise funds. In 2020, the amount of new venture capital investments recorded about 7.7 trillion South Korean won.

The South Korean startup sector has grown enormously over the past decade, but there are still some areas that need qualitative improvement. For example, South Korean startups have a high failure rate compared to other member countries of the Organization for Economic Co-operation and Development (OECD). Moreover, the infrastructure for using commercial and professional services still requires significant improvement.

In the following 5 chapters, you will quickly find the 31 most important statistics relating to "Startups in South Korea ".

The most important key figures provide you with a compact summary of the topic of "Startups in South Korea " and take you straight to the corresponding statistics. 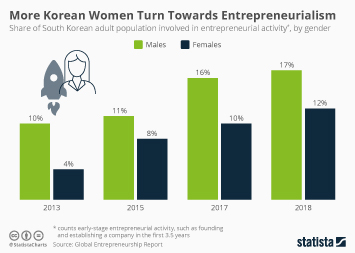 share of male and female entrepreneurs in South Korea