Published by
Jang Seob Yoon,
Mar 7, 2022
LG Group, one of the four most successful family-run conglomerates in South Korea alongside Samsung, Hyundai, and SK, is primarily known for its electronics and display products worldwide. With the launch of the holding structure, LG Corporation was established with each of LG’s subsidiaries operating independently. As of 2020, there were 13 listed and 51 unlisted companies under LG Corporation. The main source of LG Group's income is derived from LG Electronics, while the chemical sector, represented by LG Chem, also continues to perform admirably.

What products are manufactured by LG Electronics?

LG Group's electronics sector was found in 1958 and is named LG Electronics. In recent years, the revenue of LG Electronics has increased and its largest business sector was the home appliance and air solution segment. The company's major products are consumer electronics including televisions, smart devices, and white goods such as refrigerators, washing machines, and air conditioners. The company has recently been developing its future technology in various business areas, with a focus on vehicle components. Its revenue from vehicle component solutions has increased dramatically every year and recorded a new high in 2020.

How does LG Chem prepare for the future?

LG Chem is Korea’s largest chemical company and one of the leading chemical companies in the world, with sales spreading across different sectors of the industry. LG Chem relies heavily on its petrochemical business, but it also has diverse operations, notably in the battery sector. The battery sector has seen a steady increase in its sales revenue over the years. Batteries produced by LG Chem are used in smartphones and laptops, with larger automobile batteries being supplied to major automakers and energy storage systems (ESS).

How well is LG Display performing?

During the last two decades, LG Display has taken over the display industry as the leading manufacturer. The company is a multi-trillion South Korean won business and its main products are display panels for televisions and mobile devices. Recently, LG Display shifted its focus towards producing OLED panels for the automotive and aircraft industry. Along with LG Electronics and LG Chem, the revenue generated by LG Display is an essential part of the financial backbone of LG Corporation.

How has LG consolidated its telecommunications business?

In 2010, LG decided to merge several fragmented departments related to telecommunications into one company. The business was succeeded by LG U+, which is one of the major carrier service providers in South Korea. LG U+ built the world's first nationwide LTE network in 2012 and 3-band CA commercial networks in 2014. Now, as one of the 5G operators in South Korea, LG U+ has secured around 23 percent of 5G subscriptions and now focuses on discovering various business opportunities based on 5G technology.

In the following 6 chapters, you will quickly find the 26 most important statistics relating to "LG Group of South Korea ". 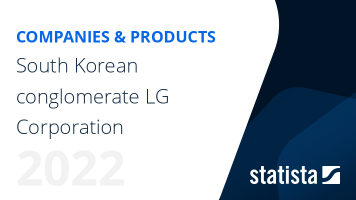 The most important key figures provide you with a compact summary of the topic of "LG Group of South Korea " and take you straight to the corresponding statistics.