South Korea’s telecommunications industry is largely dominated by three main companies after the government’s decision to privatize the sector in the early 2000s. With the industry led by KT Corporation, SK Telecom, and LG U+, all three companies are among South Korea’s elite group of large companies. The aforementioned trio are active in all facets of telecommunications, providing services for mobile, landline, and internet customers in South Korea.

Who are the leaders in different telecommunications market segments?

South Korea is home to millions of mobile phone users, with SK Telecom claiming the top spot for mobile operator subscriptions. With the rollout of 5G gaining further traction, SK Telecom continued to take the lion’s share of 5G subscriptions in South Korea. As for more traditional landline phones, KT was by far the leader of the segment, commanding an imperious market share compared to its competitors. As the successor to the public enterprise that was formerly responsible for telecommunications in South Korea, KT more than lived up to its heritage by leading the market for internet providers on top of its near-monopoly on landlines.

Why are Mobile Virtual Network Operators growing in popularity?

Mobile Virtual Network Operators, or MVNOs, are slowly but steadily becoming an attractive alternative to the traditional big three Mobile Network Operators (MNOs). The leading factor for consumers choosing MVNOs was how economic the fees were compared to contracts from MNOs. What was particularly noteworthy was the fact that MVNO subscribers were getting younger. As to whether this is merely a temporary trend, or a signal of MVNOs becoming a bigger force in the market, only the future will tell. Nevertheless, the caveat of MNVOs utilizing the networks of the traditional leading companies still remains valid, with MNOs also providing their own MVNO services to customers in South Korea.
This text provides general information. Statista assumes no liability for the information given being complete or correct. Due to varying update cycles, statistics can display more up-to-date data than referenced in the text. 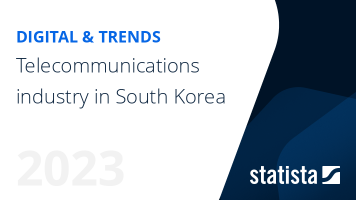 The most important key figures provide you with a compact summary of the topic of "Telecommunications industry in South Korea" and take you straight to the corresponding statistics.