Published by Statista Research Department, Feb 2, 2022
The heating, ventilation, and air conditioning (HVAC) technology provides environmental comfort through thermal manipulation (heating and air conditioning) and acceptable indoor air quality (ventilation). Sometimes refrigeration is also included in the field as HVACR. The HVAC industry is largely fueled by regional regulations and differences: the HVAC market size in Asia was said to be significantly bigger than, for example, the United States, whereas Italy was said to be Europe’s biggest HVAC market in 2018. Due to these differences between countries, there is little to no comparative information on this competitive market. In the United States alone, for example, a certain level of fragmentation can be observed, as several U.S. HVAC companies reached billions worth of market cap in 2019.

A growing demand, but problems persist

It is generally assumed that growing concerns worldwide on climate change and awareness of energy efficiency will lead to a growing demand of climate control systems, like HVAC. This development will be further propelled by a growing amount of government initiatives, providing tax cuts to such systems on top of home upgrades of refurbishments. There are still issues to be solved, however. Take the differences in installation costs between, for instance, several U.S. cities: Installation costs in New York were around 74 percent higher than the average cost for the 30 largest U.S. cities combined. Cities found in the state of Texas made up the other end of that spectrum as costs in San Antonio, Houston and Dallas were between 30 to 40 percent lower than said average. Additionally, there is the worldwide shortage in the work force as a lack of skilled professionals could hinder the development of the HVAC market. For example, the number of HVAC employees in the UK is forecast to decline by two percent between 2020 and 2025.

Smart home and HVAC: is the future at hand?

Smart homes are increasingly named as a tool that could help in achieving residential energy efficiency. Whilst not being mentioned as the top building feature on the minds of U.S. home buyers in 2020, realtors do observe that connected home features are growing in importance. How much, then, will HVAC grow in the future when paired with smart home, or IoT (“Internet of Things”) devices? There are several indicators to predict this. Forecasts on the number of connected devices for HVAC purposes, on the one hand, estimate this figure will have more than doubled between 2019 and 2023 – and more than tripled between 2019 and 2025. The revenue of HVAC sensors, on the other hand, is believed to increase by over 63 percent between 2019 and 2027, although the source admits here that rising electricity costs and increasing use of HVAC sensors in cars can also be listed as drivers for that particular market.

In the following 8 chapters, you will quickly find the 40 most important statistics relating to "HVAC industry".

The most important key figures provide you with a compact summary of the topic of "HVAC industry" and take you straight to the corresponding statistics.

Smart home in the United States 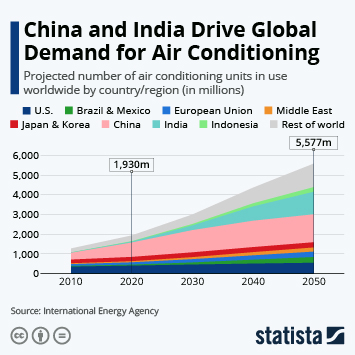