Published by Shanhong Liu, Sep 21, 2020
Smart home refers to a home setup in which appliances and devices are controlled through internet connection. From smart doorbells to thermostats and light bulbs, smart home has grown popular all over the world. It was estimated that around 27 percent of the population in the United Statesowned a smart home device in 2019, the highest forecast smart home penetration rate among the studied countries. Norway ranked second in the list with 25 percent, followed by the other Scandinavian countries Sweden and Denmark with 23 percent penetration rate each. As a consequence of smart home’s growing popularity, greater revenues have been generated and the smart home sales in the United States were projected to reach more than 47 billion U.S. dollars by 2024, which would be approximately three times as much as the revenues in 2017.

As of 2020, the most commonly owned smart home devices among Americans were smart speakers and digital streaming devices. In fact, there were already 157 million smart speakers being used in the U.S. households by the end of 2019 - an amazing figure given the relatively recent introduction of the product to consumers. Among other connected devices in use were energy managing devices, security and safety devices, as well as smart appliances, such as smart washing machines.

There are different ways to control smart home devices. The most common control method for connected home devices in the United States in 2019 was the use of an app. Voice command, whether via a smart speaker, or a smartphone with virtual assistant, or the virtual assistant built into the product, is also widely used to control smart home devices. Smart home penetration rate in the United States was expected to increase across all segments in the following years, with control and connectivity projected to be used by more than half of Americans by 2024, whereas smart appliances will be less widely adopted.

In the following 7 chapters, you will quickly find the {amountStatistics} most important statistics relating to "Smart home in the United States".

The most important key figures provide you with a compact summary of the topic of "Smart home in the United States" and take you straight to the corresponding statistics.

Internet of Things (IoT) in Europe

Internet of Things (IoT) in the U.S. 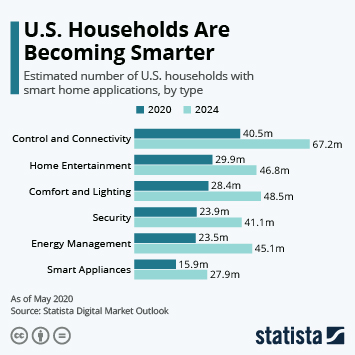 us households with smart applications dmo