Published by C. Textor, Feb 11, 2022
With the rapid development of China's globalization process, worldwide investment of Chinese enterprises has experienced rapid growth over the last two decades, reaching its peak with over 196 billion dollars in foreign direct investment (FDI) outflows in 2016. While global FDI slumped dramatically in 2020 due to the COVID-19 pandemic, Chinese FDI outflows even increased against the trend to 153.7 billion U.S. dollars, making China the largest global direct investor for the first time in history.

Driven by China’s fast economic development, the country’s outward investment stock grew quickly from only around 28 billion U.S. dollars in 2000 to 2,581 billion in 2020. A large part of this investment volume was used for mergers and acquisitions, which attracted the attention of the Chinese government and foreign countries alike and led to stronger market surveillance and lower investment outflows since 2017. Although China is one of the most restricted countries regarding outward FDI flows in comparison with developed nations, the government still encourages its companies to go global and has taken steps to facilitate outward investments in recent years.

Given China’s important role in global value chains and the low FDI intensity of its economy, there is a huge potential for increased overseas investment. However, as geopolitical tensions are growing and concerns about national security and strategic asset protection is rising, the future development of China’s FDI flows might be strongly influenced by domestic and international political factors.

A regional breakdown of China’s outward FDI indicates that investment flows are primarily directed towards Asia. However, nearly 60 percent of the total FDI volume in 2020 was transferred to Asia’s financial hub, Hong Kong, and around ten percent to the Cayman Islands and British Virgin Islands, which makes it difficult to identify final investment destinations. Based on transactional data, it was estimated that in 2020 around 7.2 billion U.S. dollars have been invested in the United States and 6.5 billion in European countries. Sectors receiving the most direct investment from China were leasing and business services, manufacturing, and wholesale and retail trade.

In the following 5 chapters, you will quickly find the 33 most important statistics relating to "Foreign direct investment (FDI) from China".

The most important key figures provide you with a compact summary of the topic of "Foreign direct investment (FDI) from China" and take you straight to the corresponding statistics.

Investment in Belt and Road countries 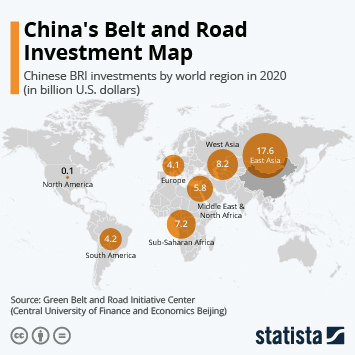