Published by
Amna Puri-Mirza,
Mar 22, 2022
Saudi Aramco, founded in 1933 as California-Arabian Standard Oil Company, started its first oil drilling on Saudi soil in 1938, in order to quench European and North American demand for oil during the second World War. Later, the company was re-named Arabian-American Oil Company in 1944 and extended its oil exploration ventures onto the wider Arabian Peninsula. After a dispute with the then Saudi King Abdulaziz, the company started to share half of its profits with the Saudi Arabian States. As a result of the Yom Kippur war of 1973, Arab oil producing states imposed an oil embargo towards countries supporting Israel during the conflict. In the aftermath, the Saudi Arabian government gradually started to nationalize Saudi Aramco and as of 1981 it became 100 percent state-owned. Saudi Arabia is today a rentier state, as 23 percent of its GDP is generated from oil rent. Saudi Arabia has established itself as the de facto leader of OPEC.

As of recently, Saudi Aramco employs 68.5 thousand people. It is considered one of the most profitable companies worldwide. The total revenue of Saudi Aramco for the 2021 financial year was 359 billion U.S. dollars. Saudi Aramco’s leadership in the oil industry is also reflected when comparing it with other major oil and gas companies. Saudi Aramco is the global leader in daily crude oil production, along with Exxon mobile and BP.

This bold move in transforming Saudi Aramco, from a state-owned cooperation into a partly public company, is all a part of Saudi Arabia’s crown prince, and de facto leader of the country, Muhammad bin Salman’s idea to modernize the Kingdom. According to the Agenda 2030, the Saudi Arabian government is planning to diversify its economy and to end its dependency from the oil revenue. Saudi Aramco’s IPO was a crucial step in the reformation of the Saudi economy and society.

In the following 5 chapters, you will quickly find the 27 most important statistics relating to "Saudi Aramco".

The most important key figures provide you with a compact summary of the topic of "Saudi Aramco" and take you straight to the corresponding statistics.

Crude oil industry in the GCC 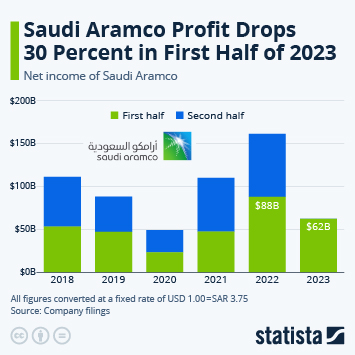 Profits of Most Profitable Company Slide 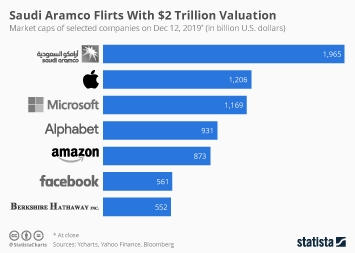