Published by N. Sönnichsen, Mar 4, 2022
Crude oil is one of the most sought-after commodities in the world today. Its wide array of uses ranges from energy generation to its application as a feedstock for transportation fuels and petrochemical products such as plastics, solvents, and adhesives. Hence the oil industry is one of the most powerful branches in the world economy and changes in benchmark oil prices have great implications for most manufacturing sectors and consumers.

Crude oil is formed over millions of years by organic materials decomposing in a low oxygen, high pressure environment. Due to the time it takes for crude oil to form, it is considered a fossil fuel, and its reserves are finite. As an increasing number of conventional reserves such as underground reservoirs were depleted, unconventional means of oil extraction have become more viable. Through their exploration of shale oil and oil sands, the United States and Canada have become major oil-producing countries. Over four billion metric tons of oil is produced worldwide every year, with the Middle East housing the greatest share of proved oil reserves, at close to 50 percent.

With oil serving such a great number of purposes, it is unsurprising that oil (and gas) companies are among the largest corporations worldwide. In 2021, Chinese state-owned China National Petroleum Corporation (CNPC) and the Sinopec Group ranked fourth and fifth, respectively in a list of the largest company in the world based on revenue. Although many oil companies had reported financial struggles throughout 2020 due to the coronavirus pandemic, three other oil majors were also ranked among the 20 largest companies.

China is the world’s largest oil importer, but the U.S. remains biggest consumer

Despite growing concerns over fossil fuel use, oil consumption has remained at an all-time high. The U.S. is the country with the highest oil consumption worldwide, followed by China, which has seen oil demand steadily increase over the past decade. As it has no notable reserves domestically, China is also the world’s leading oil importer.

Oil benchmark rollercoaster in light of the Russia-Ukraine war

Whereas 2020 was marked by a rapid decline in oil prices due to the economic fallout from the pandemic, greater demand prospects and Russia’s invasion of Ukraine have seen benchmark prices surge to an 8-year high. In late February 2022, weekly crude oil prices topped 100 U.S. dollars per barrel for the first time since 2014 as traders forecast severe supply restraints by Russia.

In the following 7 chapters, you will quickly find the 33 most important statistics relating to "Oil industry worldwide".

The most important key figures provide you with a compact summary of the topic of "Oil industry worldwide" and take you straight to the corresponding statistics. 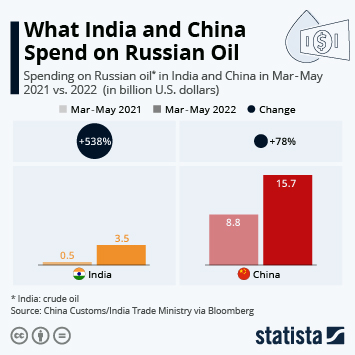 What India and China Spend on Russian Oil 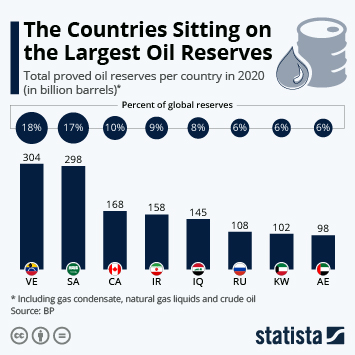 The Countries Sitting on the Largest Oil Reserves