Since the 1980s, the production and development of robotic technology have grown exponentially in Japan. Robots have been predominantly utilized in assembly lines for electric machines and automobiles. They promise to alleviate some of the economy's problems, such as unsatisfactory production efficiency and labor shortages. However, robotic technologies have also come into focus as potential solutions for the direct implications of the aging Japanese demographic: By employing robotics in the healthcare sector.

Japan and the worldwide market

Today, several of the leading companies in the global industrial robot market stem from Japan, such as Mitsubishi Electric, Fanuc, and Kawasaki Heavy Industries. In addition, Japanese companies have a strong presence among the largest robotics patent owners worldwide, with Toyota Motor being the leader among Japanese companies. Furthermore, Japan accounts for the second-largest share of industrial robot unit shipments, being outpaced only by China. While the growth of the market in China is unparalleled, Japan continues to be one of the leaders in developing and using cutting-edge robotic technologies and has positive outlooks for its domestic robotics market as well. Especially the demand for collaborative manufacturing robots was estimated to increase substantially within this decade.

Expectations for the coming years

In its Science and Technology Basic Plans, which set national policy guidelines for science and technology innovation, the Japanese government has emphasized the further development and use of artificial intelligence (AI), robots, the Internet of Things (IoT), and big data. “Society 5.0” is envisioned to fully integrate technological solutions into the infrastructure of households, industries, and the public. Research projects of the New Energy and Industrial Technology Development Organization (NEDO), one of Japan’s research and development agencies, focus on issues of robotics in logistics, such as last-mile delivery or drones. Outlooks for the domestic logistics and transfer robot market reinforce the segment’s potential, with estimations for 2027 as high as about 82.4 billion Japanese yen. Ultimately, the integration of these technologies into the daily lives of people and the work routines of employees will depend on their acceptance.
This text provides general information. Statista assumes no liability for the information given being complete or correct. Due to varying update cycles, statistics can display more up-to-date data than referenced in the text.
Alexandru Arba
Research expert covering Japan
Get in touch with us now
Published by Alexandru Arba, Oct 15, 2022

Companies with the most robotics patents worldwide 2012-2021 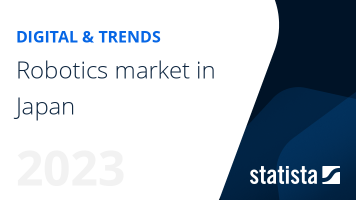 The most important key figures provide you with a compact summary of the topic of "Robotics industry in Japan" and take you straight to the corresponding statistics.