Published by
Alexandru Arba,
Oct 15, 2022
Kawasaki Heavy Industries, Ltd. is a major Japanese multinational corporation founded by Shozo Kawasaki in 1878 in Tokyo. Formerly known as Kawasaki Tsukiji Shipyard, the company branched out into other areas of the Japanese heavy industry over the 20th century. Its shipbuilding, rolling stock manufacturing, and aircraft systems divisions merged to form Kawasaki Heavy Industries (KHI), which would expand its business areas later even further. As of today, Kawasaki has added energy systems and industrial plants, motorcycles and engines, as well as precision machinery and industrial robots to its product portfolio.

The wide sphere of mobility is Kawasaki’s primary business. It covers the manufacturing of aerospace systems, rolling stock, ships, as well as motorcycles and engines for leisure, enjoyed by many throughout the globe.
In the aircraft sector, Kawasaki mainly manufactures and develops defense and commercial airplanes, helicopters, as well as jet engines. For commercial use, the company helped develop, for example, the Boeing 777, 777X, and 787 Dreamliner. Kawasaki technology is part of turbofan engines in many Boeing and Airbus aircraft, like the Rolls-Royce Trent series, the IAE V2500, or the Pratt & Whitney PW1000G. The company is reportedly considering extending its services to the promising market of jet engine maintenance, repair, and overhaul (MRO).
In the defense sector, the company works closely together with the Japan Self-Defense Forces. Unlike much other defense equipment built under license, the Kawasaki P-1 Maritime Patrol Aircraft and the Kawasaki C-2 Transport Aircraft were developed and manufactured in Japan. KHI engages, above all, in the spacecraft sector. It has manufactured rocket fairings as well as components for space stations and satellites.

Kawasaki constructs complete infrastructure and industrial facilities, ranging from water and waste treatment sites to production and power plants (fossil fuels and renewable energy sources). Additionally, the company offers large- and small-scale equipment for the respective facility. While KHI builds all sorts of large material handling systems, such as cranes, excavators, or conveyors, it also applies these technologies to precise robots, hydraulic systems, and machinery. Prospective clients are anyone from state actors to high-tech companies.
A recent focus of Kawasaki is on liquified natural gas (LNG) and hydrogen. LNG is regarded as a viable fuel to bridge the technological transition to energies free from greenhouse gas emissions. As LNG is a fundamental energy source in Japan, KHI and other domestic shipbuilders are experienced with the construction of LNG carriers. They provide the necessary low temperature (-162°C) to liquefy the gas for economical transportation. Based on its complementary know-how of hydrogen liquefying (-253°C) and storage, Kawasaki plans to develop liquified hydrogen carrying vessels. If the transported hydrogen is then produced with renewable energies, a transition to carbon-free energy and mobility seems possible.

In the following 7 chapters, you will quickly find the 36 most important statistics relating to "Kawasaki". 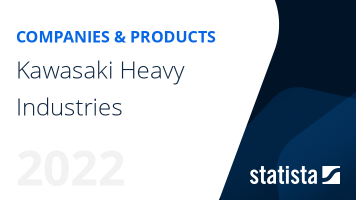 The most important key figures provide you with a compact summary of the topic of "Kawasaki" and take you straight to the corresponding statistics.