The travel and tourism industry in Egypt is one of the country’s leading economic sectors, generating about 389 billion Egyptian pounds for the GDP in 2018. About 90 percent of the direct travel and tourism contribution to Egypt derives from leisure spending compared to 12 percent of business spending. The travel and tourism sector is also a major employer in the country with a workforce of 2.16 million in 2021.
Egypt is as a travel destination caters for every budget with is tourist attractions and climate. A main appeal for people to visit Egypt are the pyramids and ancient historical sites from the pharaonic reign. Located on the south of the Mediterranean Sea, Egypt offers a warm climate all year around. Besides beach holidays, the red sea is a popular destination for snorkeling and diving. Egypt attracts not only Western tourists form Europe and North America but also interregional tourists from other Middle East and North African states. Within the MENA region, the country ranks right behind Saudi Arabia and the United Arab Emirates in terms of tourist arrivals, although the majority of international arrivals in Saudi Arabia are religious pilgrims wishing to visit the holy sights of Mecca and Madinah.

The past politically tumultuous decade has left its mark on the travel and tourism sector in Egypt, with a steep decline in its growth rate. Egypt was on the forefront of the Arab spring from the beginning of 2011. Since the protests, the country has seen the overthrow of two governments. Though the public as well as the civil society were very keen on keeping international tourists safe and unaffected from its internal turmoil, it did however leave tourists unsettled as to whether Egypt is still a suitable travel destination. This is strongly reflected in the declining tourism expenditure in Egypt since the Arab spring. Though a new military regime has established itself in Egypt, internal stability has not been evident to the external viewer. Therefore, Egypt has been ranked as on of the worlds most dangerous places to visit.
This text provides general information. Statista assumes no liability for the information given being complete or correct. Due to varying update cycles, statistics can display more up-to-date data than referenced in the text.

Saifaddin Galal
Research Expert covering the economy and society on Egypt, South Africa, and Ethiopia
Get in touch with us now
Published by Saifaddin Galal, Jun 29, 2022

Total contribution of travel and tourism to the global economy
5.81tr USD

Total contribution of travel and tourism to GDP worldwide 2019-2021 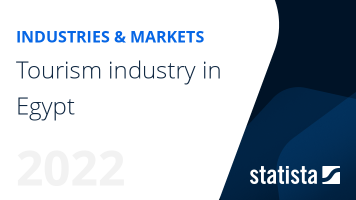 The most important key figures provide you with a compact summary of the topic of "Tourism industry in Egypt" and take you straight to the corresponding statistics.