South Korea’s traditional means of mobility are passenger cars, public buses, and trains, not unlike many other countries. The passenger car market has grown alongside the country’s economic growth. Even with the economic difficulties in recent years, the car ownership rate and number of passenger cars each increased by over 40 percent during the last decade. Buses and trains, on the other hand, have seen decreased or fluctuating usage. In the midst of all this, alternative transport methods have appeared on the market. Increasing numbers of Koreans are sharing cars or hailing rides, as well as using public bike rentals. Personal Mobility Devices are also gaining popularity.

The car sharing market in South Korea showed incredible growth over the years. Most users of the service are in their 20s and 30s, have often just started their careers, and do not own houses or cars. Car sharing puts a car at their disposal, whenever they want and need it. Convenient smartphone applications and often newer-model cars offered by providers are proving useful for drawing in customers.

Ride hailing is also widely used and the majority of survey respondents said they used ride-hailing apps. Kakao Taxi is by far the most popular application and is used by the majority of ride-hailers. Ride hailing is an attractive service because the mobile apps are easy to use and more convenient than trying to manually hail a taxi on the street.

The number of public bikes rentals in the capital city of Seoul has skyrocketed over the past years. Seoul Bike, also called Ddareungi, was introduced in order to reduce road traffic and greenhouse gas emissions. The number of Seoul Bike users has increased steadily with the cumulative number of rentals having already exceeded the 30 million mark in 2019. As one of the last mile transportation methods, public bikes were mostly used for a short distance within four kilometers.

A Personal Mobility Device refers to electric-powered, low to medium-speed (less than 40 km/h), personal means of transportation such as the Segway, electric bikes, scooters, skateboards, and more. Segways and other devices have drawn increasing public interest which has stimulated market growth for such devices. As of 2016, the market size was around 60 thousand devices, but it was estimated that it would grow to around 200 thousand devices by 2022. Despite increasing interest, however, only a third of survey respondents answered that they would be willing to use a PMD.
This text provides general information. Statista assumes no liability for the information given being complete or correct. Due to varying update cycles, statistics can display more up-to-date data than referenced in the text.

Jang Seob Yoon
Research expert covering South Korea
Get in touch with us now
Published by Jang Seob Yoon, May 13, 2022 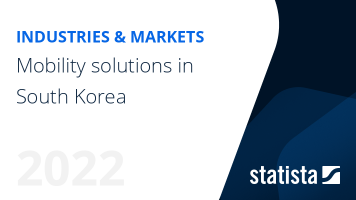 The most important key figures provide you with a compact summary of the topic of "New mobility solutions in South Korea" and take you straight to the corresponding statistics.

Impacts of COVID-19 on mobility market