Published by Statista Research Department, Sep 10, 2020
The United Kingdom has one of the most vibrant live music scenes in the world. Venues sell out across the country, with local music fans as well as music tourists from abroad paying good money to see their favorite artists perform on stage. Not only is live music an integral part of the cultural scene in the UK, but it is also vital to the economy. In 2018, the live music industry was worth 1.1 billion British pounds to the UK.
Over 190 thousand jobs are sustained by the music industry in a variety of sectors, with more than 30 thousand employed in the live music sector as promotors, festival organizers, and ticketing agents. The vast majority of people working in the music industry are employed as musicians, composers, and producers. Close to 50 thousand jobs in the UK are sustained by music tourism.

Around 30 million people went to see live music performances in the UK in 2018. Many of these music fans will have been to see concerts at the biggest indoor music venues in the UK, like the Manchester Arena and the O2 Arena in London. Others will have been to the country’s largest music festivals. Despite increasing ticket prices at festivals like Glastonbury, festivals are selling out as fast as ever.

In the following 5 chapters, you will quickly find the 36 most important statistics relating to "Live music industry in the UK".

The most important key figures provide you with a compact summary of the topic of "Live music industry in the UK" and take you straight to the corresponding statistics. 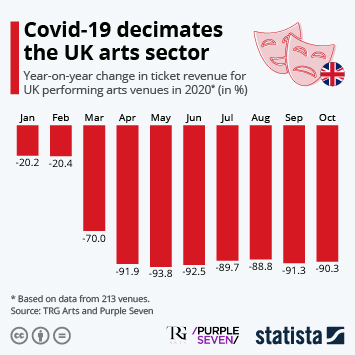