As the virtual presence is becoming more common, indirect confrontations are becoming more frequent. Under the cover of anonymity, harassers have long been able to act with impunity. Reacting to these attacks, the first action against online harassment was put in place by the French government at the end of 2014. Henceforth, any person repeating remarks or behavior, with the effect of deteriorating the living conditions of another person, was now liable to one year of imprisonment and a fine. With a slowly rising Digital Civility Index of 63 in 2021, which indicates the dangers and the online responses of all internet actors and stakeholders, the internet is definitely in need of more regulations.

When expressing their fears of the internet in 2021, children were more scared to be harassed than have their personal data stolen. With a possible link towards harassement, more than half of these children had already argued with someone online, whereas 46 percent of them had been subject to insults in 2021.

Harassment on social media can be expressed in several forms: the creation of fake profiles and, the most common, sending insults. These attacks are often discriminatory in nature, amounting to homophobia, Islamophobia, racism or sexism. In 2019, more than 40 percent of people under 50 had already suffered repeated personal attacks on online social platforms, as did 22 percent of young people aged 18 to 24. Children were mostly attacked by strangers online. Surprisingly, 42 percent of girls aged 11 to 14 were the targets of their classmates in 2021.

Online dating and measures against harassement on the internet

Even though hate speeches and discrimination crimes had a lower rate on the internet, an increasing form of harassement on dating platforms can be observed. With rising acts of "revenge porn", and the ease with which this content can be posted and distributed online, half of people who have shared private sexual content with someone else dread the exposure. It is women who, for the most part, are affected on online dating sites. In 2021, 60 percent of women aged 30 to 39 had already received sexually explicit and obscene messages on dating apps against their will. With noticeable resentment against the political configuration and long-lasting social structures causing dissatisfaction in France, the number of reported general insults towards minority groups like migrants, the LGBT community as well as publicly criticized political figures had reached an all-time high during the last quarter of 2019. In line with Facebook globally deleting about 25 million hateful comments during the first quarter of 2021, recent events such as the Black Lives Matter movement triggered enough incentives to start an international online and offline dialogue about hate speech, discrimination and other forms of violence. Hence, the number of French online hate speech removal instances after the first quarter of 2020 rose. In general, French people saw social media companies as the responsible entities to improve the online civility in France and wished for more respect, freedom and security on the web.
This text provides general information. Statista assumes no liability for the information given being complete or correct. Due to varying update cycles, statistics can display more up-to-date data than referenced in the text.
Published by Ani Petrosyan, Oct 18, 2022

Most common online risks in France 2020

Share of people who are victims of cyberbullying in France 2020, by generation 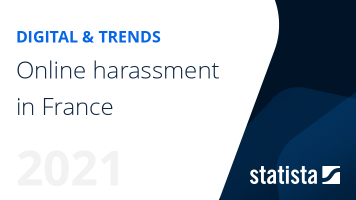 The most important key figures provide you with a compact summary of the topic of "Online harassment in France" and take you straight to the corresponding statistics.