Cyberbullying is a form of harassment in digital communication mediums, such as text messages, internet forums, chat rooms, and social media. As opposed to real-life bullying, online bullying takes advantage of the anonymity of the internet, as well as the possibility to quickly spread rumors, gossip, photos, or (mis)information to large groups of people. In the United States, over 40 percent of adult internet users report having personally experienced cyberbullying in their lifetime. Among teenagers, this phenomenon is even more pronounced, as an ever-increasing number of children are gaining access to digital means of communication at a young age. As of 2020, the cyberbullying victimization rate among middle and high school students stands at an all-time high.

Just like physical bullying, online bullying is generally aimed at young people and often originates from schoolmates or other people their age. Victims of abusive online behavior are subjected to anything from threats, humiliation, impersonation, hate speech, stalking, sexual harassment, and discrimination based on religion, race, or sexual identity. According to respondents who experienced targeted hate on the internet, social media platforms like Facebook are the primary cyberbullying environments in the United States. As these websites and apps have low entry barriers, little regulation, and various means of direct communication, they are often used to send unwanted messages or spread harmful content. While this malicious behavior occurs in the digital sphere, exposure to online harassment can severely impact the emotional well-being of victims. Internet users may suffer from anxiety, depression, and stop their online activity altogether, highlighting that cyberbullying leaves not only a digital but also physical and psychological footprint.

Over the last few years, global awareness of cyberbullying has increased significantly. Even though a large share of affected teens might not disclose digital troubles to family members, parents are more sensitized than ever when it comes to issues like online harassment. This focus on digital security risks and young internet users' safety is also increasingly reflected in U.S. legislation: As of 2018, some 48 states have passed cyberbullying laws, most of them including criminal sanctions for electronic harassment. In response to the rising number of incidents involving sexual harassment, 26 states have issued sexting laws. A total of 42 states have introduced revenge porn laws that address the distribution of sexually explicit content without consent. As most online attacks occur on social media, calls for more regulation, liability, and action by social media companies are growing louder. Facebook removed close to 11 million bullying and harassment-related content items from their website in 2019. Still, the dark figure of unreported and undetected cases on the network and the entire digital landscape remains considerably higher.
This text provides general information. Statista assumes no liability for the information given being complete or correct. Due to varying update cycles, statistics can display more up-to-date data than referenced in the text.
Published by S. Dixon, Jan 3, 2023

U.S. state with the highest rate of electronic bulling among students
New Hampshire (20.1%) 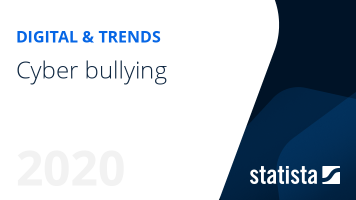 The most important key figures provide you with a compact summary of the topic of "Cyber bullying" and take you straight to the corresponding statistics.

Forms and impact of online harassment

Men and women online
Internet usage of teenagers in the United States
Bullying and cyber-bullying in Italy
Coronavirus: impact on online usage in the U.S.
Online harassment in France