Published by
Jang Seob Yoon,
Nov 17, 2022
Together with South Korea’s completed vehicle industry, its auto parts supplier market is rated as one of the world’s best. The South Korean auto parts industry accounts for about five percent of the global output of parts production and its sales value was well into the multi-billion U.S. dollar range. South Korean auto suppliers have remained competitive in the global parts market with eco-friendly parts, advanced features, and modularization. Furthermore, South Korea’s position as an IT powerhouse is expected to benefit local auto parts manufacturers in this regard.

Who are the major auto suppliers in South Korea?

The highest-ranking company among major South Korean auto part makers was Hyundai Mobis, placing seventh among the world’s top one hundred auto suppliers. Three others were also members of the Hyundai Motor Group conglomerate: Hyundai WIA, Hyundai Transys, and Hyundai KEFICO. As the leading South Korean parts maker, Hyundai Mobis continued to record multi-trillion South Korean won sales revenue. The other companies featured on the aforementioned list were not as prolific in terms of sales, but nevertheless managed well enough for themselves.

What is the car tire market like in South Korea?

The South Korean automobile tire market is dominated by producers within the country. The market was largely dominated by two companies, Kumho Tire and Hankook Tire, with Nexen Tire being the next in line. Although it was in second place in terms of its domestic market share, Hankook Tire was South Korea’s leading tire maker on a global scale. Hankook Tire’s sales revenue maintained steady levels in recent years, with most of the company’s revenue coming from overseas sales, as it exported high-quality tires to premium car makers such as Mercedes-Benz.

In the following 5 chapters, you will quickly find the 26 most important statistics relating to "Auto suppliers in South Korea". 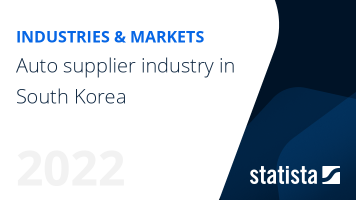 The most important key figures provide you with a compact summary of the topic of "Auto suppliers in South Korea" and take you straight to the corresponding statistics.