Published by L. Kettenhofen, Nov 22, 2021
The construction industry is an important pillar of the Japanese economy that accounted for around 5.3 percent of the gross domestic product (GDP) in 2019. The industry has experienced an overall upward trend in recent years, driven by reconstruction after the Great East Japan Earthquake and the Tokyo Olympics, before sales declined by 6.6 percent during the coronavirus (COVID-19) pandemic.
While there are more than 470 thousand licensed construction companies in Japan, a group of five major general contractors, called „Super Zenecon”, comprising Obayashi Corporation, Tasei Corporation, Kajima Corporation, Shimizu Corporation, and Taneka Corporation, dominates the Japanese construction sector. They cover a wide range of business areas, including architectural design, construction, and R&D, and each have an annual sales value of one trillion Japanese yen or more.

Recent trends in the construction industry

Over the last decade, the Japanese construction sector has recovered from a period of negative growth that had continued since the burst of the economic bubble in the 1990s. Reconstruction work following the Great East Japan Earthquake in 2011 partly contributed to the recovery. In more recent years, the Tokyo 2020 Olympic Games were a key driver of demand. Major construction projects planned in preparation for the World Expo 2025 in Osaka and the construction of the Chuo Shinkansen maglev line are expected to have a similar impact.
Infrastructure maintenance and urban redevelopment also play an important role for the construction sector as a substantial part of Japan’s deteriorating infrastructure was built in the 1960s and 1970s and the government intends to tackle its redevelopment. In Japan, which is prone to natural disasters, the construction sector is also of great importance for reconstruction and disaster prevention. As natural catastrophes such as floods have caused increasing damage in recent years, affecting annual budgets for reconstruction and disaster prevention, they will likely continue to create demand for construction work.

ICT as a solution against labor shortages?

In the following 10 chapters, you will quickly find the 45 most important statistics relating to "Construction industry in Japan".

The most important key figures provide you with a compact summary of the topic of "Construction industry in Japan" and take you straight to the corresponding statistics. 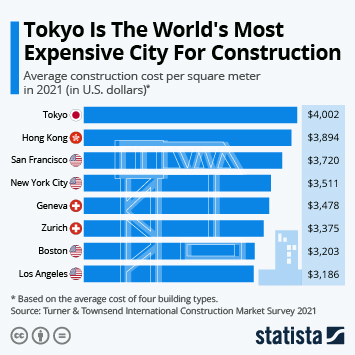