The inauguration of the first airmail airline in Spain in 1919 marked the birth of commercial air transport in the country. On September 1, 1919, the airmail route carrying the French local newspaper "La Depèchê" between Toulouse and Casablanca was inaugurated, with technical stopovers in Barcelona, Alicante, and Málaga. This first operation, carried out by the French company Société des Lignes Latécoère, was also the beginning of the regulation of air transport in Spain, as a Royal Order of August 29 that same year authorized stopovers in the country. With high investments in airport infrastructure and a well developed tourism sector, the Spanish aviation industry has evolved in becoming the second largest air passenger market in Europe, generating nearly 13 billion euros in turnover in 2019.

Coronavirus impact on the Spanish passenger and cargo segments

As the coronavirus pandemic took over the world, the Spanish aviation industry was also affected - the number of passengers carried saw a sharp decrease, from over 275 million in 2019 to roughly 76 million the next year. In an upward trend up until 2020, the total freight traffic at airports in Spain dropped to just under 790 million kilograms that year.

In addition to Iberia, the flag carrier airline of Spain, the country has another dozen scheduled airlines. Raking in over five billion euros in sales revenue in 2019, Iberia was the leading airline in that respect that year, followed by Vueling Airlines — both companies operating under the same parent company, the International Airlines Group (IAG). On the other hand, a year later, Irish ultra-low-cost carrier Ryanair held the largest share of the market, holding 19 percent of the passenger market in 2020.

Considering the number of passengers, Madrid-Barajas Airport (MAD) was the leading airport in Spain in 2020. Barcelona-El Prat (BCN) and Palma de Mallorca (PMI) airports came in second and third respectively. Along with Palma de Mallorca, several of the major airports in Spain by the number of passengers are located on the country's islands, such as Gran Canaria and Tenerife airports. Madrid-Barajas was also the busiest airport for goods transportation, as over 402 million kilograms of goods were handled there in 2020.
This text provides general information. Statista assumes no liability for the information given being complete or correct. Due to varying update cycles, statistics can display more up-to-date data than referenced in the text.

Turnover of the Spanish aviation industry 2015-2019

Number of enterprises in the Spanish aviation industry
150 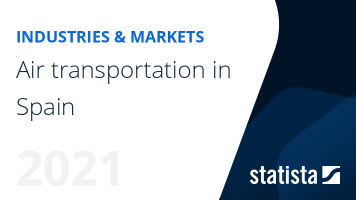 The most important key figures provide you with a compact summary of the topic of "Air transportation in Spain" and take you straight to the corresponding statistics.