Published by
Erick Burgueño Salas,
Apr 19, 2022
The world’s first passenger airline services was started by an ancestor of modern-day British Airways, George Holt Thomas in 1920s in Europe. In the beginning, only available aircraft were produced initially for military purpose. Therefore, it was an arduous task for companies to transport people by air on transformed carriers. Yet, as many years have passed, this market expanded in size, creating a multitude of sub-markets within its structure to perform necessary services.

Except for the years 2009 and 2020, global passenger air traffic demand increased steadily since 2006, becoming one of the largest markets in Europe. From 2013 onwards, passenger capacity of commercial airlines in Europe increased with at least 3.4 percent. In 2019, the number of passengers carried by air in the European Union reached over 1.1 billion people, up from 0.7 billion people in 2009. This growth indicates how rapid the aviation market increased in Europe. During the same period, the net profit of commercial airlines in Europe increased exponentially from one billion U.S. dollars in 2013 reaching 6.5 billion U.S. dollars in 2019. However, in 2020, European airlines were hit very hard by the coronavirus outbreak worldwide, losing 70 percent in passenger traffic and reporting net losses of 34.5 billion U.S. dollars.

How did European airlines handled the pandemic?

To survive the pandemic, European airlines had to either adjust their schedule by adding new routes to countries where restrictions were partially or fully lifted or increase their cargo capacity. In 2020, Lufthansa Group was the leading airline in Europe based on revenue. It is worth to mention that Lufthansa Group owns SWISS, Austrian Airways and Eurowings as its subsidiaries. When it comes to the passenger based market position, then Ryanair Group is the leading airline in Europe.

Outlook of the aviation industry

Despite temporary economic shocks such as the global financial crisis of 2008 or the coronavirus outbreak in 2020, the future of passenger aviation is obvious. As long as the desire of individuals to travel or market expansions of businesses will grow, the passenger aviation market is going to expand in response. From 2019 to 2038, it is forecasted that the estimated annual growth rates for passenger air traffic will be positive globally. Although a couple of decades ago the passenger aviation in Asia Pacific region was insignificant in size, by 2050 it is forecasted to become the largest market globally, surpassing European and North American flow of travelers.

In the following 4 chapters, you will quickly find the 26 most important statistics relating to "Passenger airlines in Europe".

The most important key figures provide you with a compact summary of the topic of "Passenger airlines in Europe" and take you straight to the corresponding statistics.

Passenger airlines in the U.S 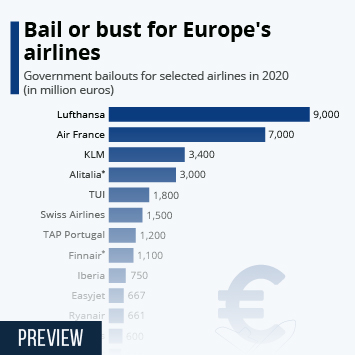