Published by
Raynor de Best,
May 2, 2022
A buzzword including digital artwork, animal pictures, trading cards, music, and online gaming, NFT or non-fungible tokens became a major digital topic over the course of 2021. NFTs grabbed headlines in March 2021 when Beeple's crypto art "First 5000 Days" became the world's most expensive NFT at 69 million U.S. dollars. This sale led to an “NFT craze”, with Google search interest for the “NFT” keyword being especially high in Asia and the United States. The digital tokens are not new, however. Being one of the oldest NFTs, the sales development of CryptoKitties – a project that involves randomly generated pictures of cats - can be retraced back to 2017. How, though, do NFTs work exactly, and are they going disrupt certain industries?

Cryptocurrencies, NFTs, and the metaverse all featured in a January 2022 webinar created and hosted by Statista, called "The cryptoverse - cryptocurrencies becoming mainstream". The original, unedited 30-minute webinar can be seen here for free, although registration is required.

Creating scarcity on the internet: how an NFT works

An NFT is a digital certificate (a “token”) that recognizes one as the owner of a digital file that has no equal to it (it is “non-fungible”). These certificates are created (“minted”) and sold on blockchain - the same technology behind cryptocurrencies. It also tracks transactions to prevent counterfeit, with Ethereum being the most popular NFT blockchain. An NFT, then, is guaranteed to be unique: no matter how many digital copies there are – MP3, JPEG, etc. - there is only one “original” file. Essentially, an NFT owner buys ownership rights. This (partially) explains why the popularity of NBA Top Shot – a game around basketball highlights videos – resembles that of collectible card games: Certain files are rarer (therefore, more valuable) than others. This scarcity can be extended in other directions too. American rock band Kings of Leon made around two billion U.S. dollars with an NFT surrounding their latest album, for instance, by giving NFT owners access to photos and unique perks alongside the album.

A digital revolution, or another tulip mania?

Are NFTs set to change industries all over the world? As of September 2021, many sources agree this is too early to tell – although there are examples where innovations are already happening. Several NFT games boast a player base of several tens of thousands of people as some of these have implemented a “play-to-earn” model – play the game to earn cryptocurrencies – which is unlike anything else found in the gaming industry. Another example includes soccer clubs like Paris Saint-Germain that issue fan tokens worth several millions in market cap, which give owners access to special behind-the-scenes content or other perks. Indeed, potential NFTs from Nike and Adidas attracted interest in the United States as these add to the unique-ness of certain sneakers. That said, four out of 10 consumers in the U.S. seem interested in NFT for the potential return on investment and maybe less so due to the innovations that the tokens bring.

In the following 8 chapters, you will quickly find the 39 most important statistics relating to "NFT".

The most important key figures provide you with a compact summary of the topic of "NFT" and take you straight to the corresponding statistics. 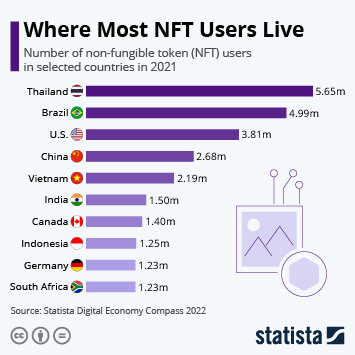 Where Most NFT Users Live 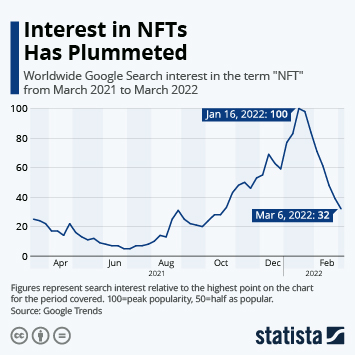 Interest in NFTs has Plummeted