A list of evolving records that use cryptography to link back to each other and contain transactional data, blockchain is a technology that has taken the business world by storm. Blockchain data is meant to be resistant to modification and acts as a secure record of transaction. The intricacies of the technology itself may be hard to grasp even for tech enthusiasts, but the growing popularity and prevalence of the technology are clear for all to see. Blockchain technologies can be used as public means of transactions as well as private ledgers for inter-company transactions and record keeping. The improved visibility and efficiency, as a result, can help organizations overcome the challenges posed by the COVID-19 pandemic.

Worldwide spending on blockchain solutions is expected to grow from 4.5 billion U.S. dollars in 2020 to an estimated 19 billion U.S. dollars by 2024. The vast majority of surveyed global business leaders reported investment plans for blockchain in their organizations, with over 60 percent of respondents mentioning a budget of at least one million U.S. dollars for the distributed ledger technology. The financial sector accounts for around 30 percent of the market value of blockchain worldwide in 2020, but the technology has spread to nearly every industry from healthcare to agriculture.

Given the massive interest in this technology, increasing numbers of blockchain startup companies have been springing up each year. In 2018 EOS, a blockchain protocol, generated a massive 4.2 billion U.S. dollars’ worth of investment in its initial coin offering (ICO), making it the largest blockchain ICO to date. The United States, currently leads the market in terms of blockchain funding, with numerous major firms investing millions each year. Although the United States is currently seen as the clear leader in terms of blockchain technology, China is narrowing the gap. China’s leading fintech and blockchain companies such as Ant Group and JD Digits have amassed a great amount of funding on their way to becoming some of the most powerful players in the field.

One major use of blockchain technology that has garnered perhaps the most attention are cryptocurrencies, with the biggest name among these being Bitcoin. As of the first quarter of 2021, the Bitcoin blockchain had amounted to around 330 gigabytes in size, and Bitcoin's market cap reached over one trillion U.S. dollars at the same time. Although Bitcoin is without a doubt the largest, other cryptocurrencies such as Ethereum and Ripple have also carved out significant market shares for themselves. Many people believe that blockchain and its use in cryptocurrency technology could replace traditional monetary transactions in the future.
This text provides general information. Statista assumes no liability for the information given being complete or correct. Due to varying update cycles, statistics can display more up-to-date data than referenced in the text.

Sector with the highest distribution of blockchain market value
Banking

Use cases for blockchain technology in organizations worldwide 2021 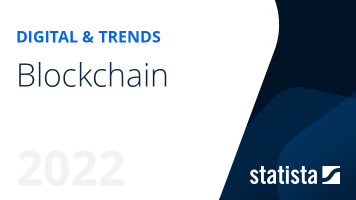 The most important key figures provide you with a compact summary of the topic of "Blockchain" and take you straight to the corresponding statistics.