Published by
Catharina Klein,
Sep 13, 2022
Since plastics are lightweight and inexpensive to produce, they are widely used, ranging from materials for the manufacturing industry to textiles, medical equipment, and beverage and food containers. In Japan, the consumption of plastic products increased throughout the past decade, leading to huge amounts of plastic waste. As a result, plastic waste pollution has become a major environmental issue. Microplastic pollution poses a threat both to the health of animals and humans, as the tiny pieces of degraded plastic absorb harmful chemicals that end up in the food chain.

In recent years, Japan was one of the largest producers of plastic products. Plastic films and sheets, as well as single-use plastic products such as plastic containers and plastic plates, represented some of the leading plastic products that were manufactured in Japan.
Plastic packaging is commonly used for food and beverage containers as it holds the image of being safe and hygienic among Japanese citizens. Furthermore, the popularity of takeaway food boxes from supermarkets, as well as vending machines with beverages in PET bottles, contribute to the generation of plastic waste. Consequently, plastic packaging made up the majority of packaging household waste.

How does Japan deal with plastic waste?

Historically, Japan exported huge amounts of plastic waste, mainly to other Asian countries. But the exports decreased significantly after 2017, when China banned plastic waste imports, forcing the island nation to find more sustainable solutions to reduce and manage its plastic waste.
Increasing to 86 percent, the recycling rate of plastic waste was much higher than the recycling rate of regular waste in Japan, which remained low at around 20 percent. The recycling rate for PET bottles was even higher, reaching over 88 percent. However, thermal recycling remained the most common recycling method for plastic waste. With this method, the waste is incinerated to generate energy. Despite the filtering technologies, which avoid incineration plants from releasing large amounts of greenhouse gases, the incineration process produces greenhouse gas emissions that contribute to air pollution and global warming. Only a small amount of plastic waste is reused for its materials, namely material recycling, to manufacture new plastic products.

As a measure to reduce the generation of plastic waste, the Japanese government prohibited all retail shops from distributing free plastic shopping bags as of July 2020. Customers are increasingly given the opportunity to use their reusable containers to buy food and other items. This measure is showing effects as Japanese people stated in a survey that was conducted in April 2022, that they tried to use reusable bags and avoided plastic bags to reduce plastic waste.
Since 2004, the government promotes the so-called 3R initiative, which encourages businesses and citizens to focus on the importance of reducing, reusing, and recycling waste. Based on this initiative, the Japanese government launched the Resource Circulation Strategy for Plastics in 2019. Its goal is to turn all plastic packaging and goods to be either reusable or recyclable by 2025 and promote switching to raw materials such as bioplastics instead.
Some Japanese companies currently work on replacing plastic products with paper products, especially for packaging materials. Although the production cost of paper is usually higher than for plastic, the paper alternatives are more compact and recyclable, posing a more environmentally friendly alternative.

In the following 6 chapters, you will quickly find the 29 most important statistics relating to "Plastic waste in Japan". 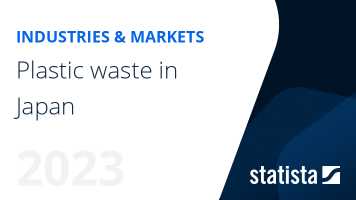 The most important key figures provide you with a compact summary of the topic of "Plastic waste in Japan" and take you straight to the corresponding statistics.