Published by
Catharina Klein,
Jul 15, 2022
Even though the volume of generated waste declined in recent years, Japan was one of the leading countries to generate solid municipal waste. Household waste represented the largest amount of generated waste, with plastic packaging making up its majority. The widespread usage of plastic products, in particular single-use plastic products such as plastic packaging and plastic food and beverage containers, leads to large amounts of plastic waste. Consequently, waste pollution has become a major environmental issue.
Furthermore, Japan ranked among the major countries that generate electronic waste. Since technology is advancing faster and the consumer demand for electronic devices keeps growing, electronic devices are often disposed of after a few years of use. Japan was among the first Asian countries to implement an electronic waste recycling program, but electronic waste still contributes to waste pollution as it is often dumped illegally.

In Japan, waste is usually sorted into categories by citizens before it is collected and is not picked up if the strict waste separation rules are not followed. Plastic, paper, PET bottles, aluminum, and glass are collected separately to be recycled. Most of the waste collected in Japan is processed in incineration or recycling facilities or is disposed of at landfills.
With the incineration rate of municipal waste amounting to close to 75 percent, incineration remains the most widely used waste treatment method in Japan, as it can easily reduce the volume of waste. Despite filtering technologies, which avoid the release of huge amounts of fumes, the incineration process produces greenhouse gases that contribute to air pollution and global warming.
The recycling rate of Japan's total waste has remained at around 20 percent throughout the past decade and therefore represented one of the lowest recycling rates among industrialized countries. In contrast, the recycling rate of plastic waste increased to 86 percent in recent years. However, thermal recycling was the main method to recycle plastic waste. With this method, waste is incinerated to generate energy.
The remaining waste is disposed of at landfills. Even though the volume of final waste disposal declined, Japan is facing a shortage of landfill sites as the remaining capacity of landfill sites is decreasing.

Since 2004, the Japanese government promotes the so-called 3R initiative, aiming to build a sound material-cycle society. The initiative encourages businesses and citizens to focus on the importance of reducing, reusing, and recycling waste.
To reduce the volume of plastic waste, the government prohibited all retail shops from distributing free plastic shopping bags. As of July 2020, all shops, convenience stores, and restaurants must charge a fee for plastic bags. These measures started to show an effect as the majority of Japanese citizens stated in a survey that they tried to avoid the use of disposable plastic products such as plastic shopping bags. Furthermore, there are plans to make the recycling of plastics used at offices or factories mandatory for large companies in 2022.

In the following 6 chapters, you will quickly find the 35 most important statistics relating to "Solid waste management in Japan". 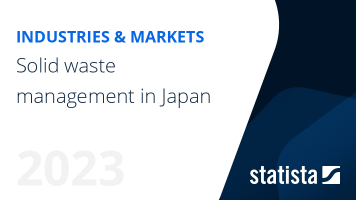 The most important key figures provide you with a compact summary of the topic of "Solid waste management in Japan" and take you straight to the corresponding statistics.

Climate change and emissions in Japan