Many industries worldwide depend on the supply of mineral commodities from underground. Consequently, the mining sector is important for the global economy. The mining sector includes the extraction of naturally occurring mineral solids, such as ores and coal, liquid minerals, such as crude oil, as well as gases, such as natural gas. In a broad sense, it includes quarrying and other preparations that are carried out at mines, or as part of mining activities.
Japan's manufacturing industries have a high demand for metals and minerals for production. Nevertheless, mining represents the smallest industry by GDP value in Japan. The archipelago has very little on-shore natural resources, which have already been mined to the point that it has become less expensive to import mined resources. Major deep-sea mineral resources exist but are not mined due to technological obstacles.

Until the 1970s there were mines for oil, natural gas, coal, gold, silver, copper, iron, and zinc in Japan, and mining was done on a large scale. But the scarce resources were quickly exhausted, while mining costs rose, and many mines stopped their operations. The Japanese mining industry declined further in the 1980s when the coal production volume started to shrink as the small deposits had already been mined. Cheaper coal imports and high production costs made coal mining less attractive. For similar reasons, the production volume of crude oil and natural gas decreased throughout the past decades.
As most of the country's primary energy supply is still covered by fossil fuels, Japan is highly dependent on imports of energy resources such as natural gas, crude oil, coal, and even uranium.

What is mined in Japan?

There remains a small amount of gold and silver in Japan which is mined, since small quantities of these precious metals are highly profitable. Limestone is also mined sufficiently, and in recent years, Japan was one of the global leading producers of bismuth. Furthermore, the archipelago has substantial reserves of iodine and represents one of the largest producers of the element.

Since many mines stopped their operations in the past decades, both the number of employees as well as the number of operating mines, for example, of limestone mines, decreased.
Ranked by total assets, International Petroleum Exploration (INPEX) Corporation represented the largest company in the Japanese mining industry. It is one of the largest oil and gas exploration and production companies in Japan. It expanded its operation range overseas and engages in exploration, development, and production projects in several countries in Asia, the Middle East, Africa, and the Americas.
This text provides general information. Statista assumes no liability for the information given being complete or correct. Due to varying update cycles, statistics can display more up-to-date data than referenced in the text.

Major companies of the mining industry Japan 2022, by total assets

Major companies of the mining industry Japan 2022, by total assets

Number of construction and mining employees in Japan 2012-2021 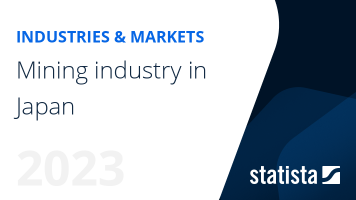 The most important key figures provide you with a compact summary of the topic of "Mining industry in Japan" and take you straight to the corresponding statistics.