What is mined in Australia?

The production of many of Australia’s metal and mining commodities far exceeded domestic consumption. When looking at coal mining for energy use, the production of coal in Australia amounted to over 12 exajoules in 2020. The gross value added from coal mining reached over 30 billion Australian dollars in 2021.

In terms of metal mining, Australia’s many gold rushes have had a long-lasting impact on the country itself. Rapid growth in the population can be attributed to immigrants moving to the country for gold rush opportunities. Further development of industry and infrastructure was made possible following the gold rushes. Today, Australia is estimated to have the largest gold mine reserves in the world. Australia is also a global leader in the mining of lithium, the demand for which is growing on a global scale.

Australia’s mining market is diverse, and accordingly, so are its mining companies. BHP and Rio Tinto, both Anglo-Australian multinational mining companies, are two of the biggest names in mining worldwide. In Australia, these companies lead the metals and mining market. Australia’s future in mining may include an expansion in the exploration and mining of elements such as cobalt, lithium, and nickel. These are necessary components for battery cells that are required for the development of green technology. The country’s proximity to Asia may see it become the leading supplier of critical minerals and metals.
This text provides general information. Statista assumes no liability for the information given being complete or correct. Due to varying update cycles, statistics can display more up-to-date data than referenced in the text.
Published by L. Granwal, May 31, 2022

Number of employees in the mining industry
188.8k

Number of employees in the mining industry Australia FY 2012-2021 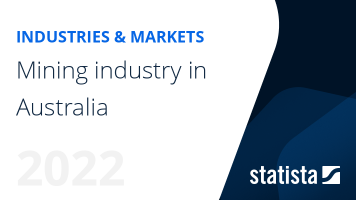 The most important key figures provide you with a compact summary of the topic of "Mining industry in Australia" and take you straight to the corresponding statistics.