Published by
Catharina Klein,
Jun 3, 2022
As a highly industrialized country, Japan depends heavily on a reliable fuel supply. Despite its decreasing final energy consumption in recent years, the country remained one of the largest energy consumers worldwide, as its global leading manufacturing industry has a high electricity demand for its production.
Scarce natural resources, the shutting down of nuclear reactors after the Great East Japan Earthquake, and the requirements of the international climate change agreement have put Japan in a dilemma of seeking ways to obtain accessible and cheap energy, and simultaneously reducing its carbon footprint.

The economic upturn after World War Two was largely fueled by the primary energy source coal that was mainly produced domestically. While the need for energy, especially in the Japanese industry, was growing stronger, there was a shift towards cheaper oil. The small deposits of coal and oil resources on the archipelago were quickly exhausted, forcing Japan to import fossil fuels from overseas. Middle Eastern countries became its most important suppliers.
To become less dependent on imports, the Japanese government started to support the nuclear energy industry, and the share of nuclear energy in electricity production expanded strongly until 2010. However, the nuclear disaster at the Fukushima Daiichi Nuclear power plant in 2011 put an end to the rise in nuclear power since all domestic nuclear reactors were switched off for security inspections. The country was once again forced to import larger amounts of fossil fuels, resulting in a decrease in its primary energy self-sufficiency rate.
In recent years, fossil fuels remained the largest energy source in electricity production, with natural gas constituting the largest source. The high dependency rate on fossil fuel imports created economic and diplomatic vulnerabilities, leading to energy security being a central concern for the country ever since. Gas shortages at the beginning of 2021, for example, resulted in increased electricity prices in Japan, highlighting the weakness of the current system.

Besides energy security, the environment is another major issue Japan must deal with. To meet its climate goals as a member of the Paris Agreement, the country must reduce its greenhouse gas emissions by 46 percent until 2030 compared to the level of 2013. In addition, the country aims to become entirely emission-free by 2050. Therefore, the Japanese government is currently making efforts to replace fossil fuels with low-carbon energy sources such as renewables and nuclear energy.
Japan restarted its first nuclear reactors in 2015, but the share of nuclear energy in the primary energy supply remained below two percent in recent years. The share of renewable energy in the primary energy supply increased significantly to over ten percent, with solar power representing the largest renewable energy source. Since the mountainous island nation has limited space on land, it currently invests in the expansion of floating solar panels as well as offshore wind parks.

In the following 6 chapters, you will quickly find the 33 most important statistics relating to "Energy sector in Japan".

The most important key figures provide you with a compact summary of the topic of "Energy sector in Japan" and take you straight to the corresponding statistics. 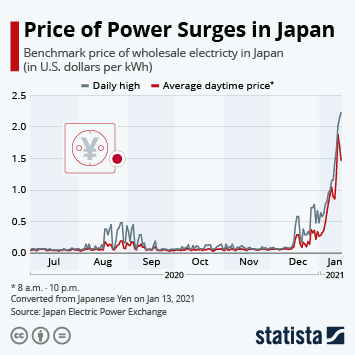 Price of Power Surges in Japan 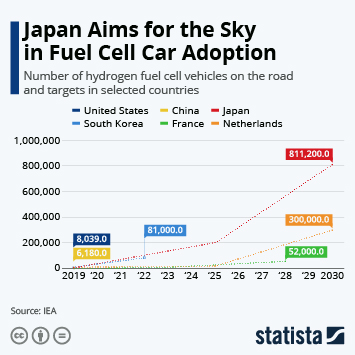 Japan Aims for the Sky in Fuel Cell Car Adoption