Social media is commonly used in Israel, where cultural, social, and political trends are often set within these platforms. Social networks serve as an essential marketing tool for companies from all industries, especially to target young audiences. In 2022, the number of social media users in Israel amounted to over 7.6 million and, according to estimates, it will increase to around 8.74 million in 2028. In addition to typical social networks such as Facebook, YouTube is exceptionally popular in Israel as in other countries due to its combination of videos and social network features. As of July 2022, TIKTORIKI was the most viewed YouTube channel in Israel, with 8.44 billion total views.

Facebook (owned by Meta Platforms, Inc.) is the most successful social network in Israel. In 2021, Facebook's share in the social media market in Israel stood at over 73 percent. However, projections showed that the number of Facebook users will slightly fluctuate in the next few years, amounted to 6.42 million in 2028. Instagram, which is also owned by Meta, has slightly fewer users, but its influence is more prominent. This network has a vast cultural impact, along with increased advertising and marketing potential. At the same time, TikTok is also becoming significantly popular among younger age groups that follow well-known figures from all fields.

In recent years, marketers have used social media platforms to advertise various products and services, from fashion and cosmetics to tourism. Both direct and indirect advertising is conducted on social networks, and indirect marketing often occurs through influencers who promote the product or service on their account. Estimates indicated that the general advertising spending on social media in Israel would reach nearly 800 million U.S. dollars in 2026. Advertising is extremely popular on Instagram. In 2022, the share of users aged 13 and older that marketers could reach with ads on Instagram stood at 63.4 percent.

The power of social media influencers

The phenomenon of social media influencers is gaining momentum in Israel. Influencers advertise products or promote content, and can be actors, models, musicians, athletes, or people without expertise. In 2022, the most popular influencers on Instagram in Israel were Digital Art and Bar Refaeli. On the other hand, the main TikTok influencers were the singer and model Anna Zak and the social media star Yuval Biton. Most influencers aim at younger audiences since over 55 percent of the Instagram users in Israel were aged 18 to 34 years in 2022.
This text provides general information. Statista assumes no liability for the information given being complete or correct. Due to varying update cycles, statistics can display more up-to-date data than referenced in the text.
Eyal Lichter
Junior Researcher
Get in touch with us now
Published by Eyal Lichter, Jan 24, 2023 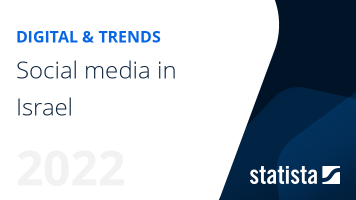 The most important key figures provide you with a compact summary of the topic of "Social media in Israel" and take you straight to the corresponding statistics.