Whether it’s Mickey Mouse t-shirts, Star Wars Lego sets or plush dolls based on the latest Pixar hit – licensed merchandise is a billion-dollar business and Disney is the undisputed leader in this category. With its vast universe of intellectual property extending from Duckburg to a galaxy far far away, the Burbank-based media and entertainment giant owns the rights to many of the world’s most beloved fictional characters.

According to its latest annual report, Disney finished last year with $4.2 billion in revenue from merchandise licensing and retail, i.e. royalties from branded products sold by other manufacturers and its own retail business. That only tells half the story, however, as it doesn’t make clear the full scale of Disney’s licensing business.

According to License Global, a trade magazine tracking the licensing industry, global retail sales of licensed Disney merchandise amounted to $55 billion in 2019, more than twice the total of second-placed Meredith Corp. The media conglomerate headquartered in Des Moines, Iowa, has several licensing deals in place, most of them leveraging the company’s well-known and trusted magazine brands such as Better Homes & Gardens, Southern Living and InStyle.

While licensed merchandise is more of a welcome side business to companies such as Disney and Meredith, some companies have specialized on acquiring well-known consumer brands in order to monetize them through licensing deals. Third-ranked Authentic Brands Group (ABG) is a prime example for such a company. Owning numerous apparel brands, the well-known Sports Illustrated magazine brand as well as the likeness/marketing rights of several celebrities incl. Muhammed Ali and Elvis Presley, ABG-owned brands accounted for $12.3 billion in licensed merchandise sales in 2019. 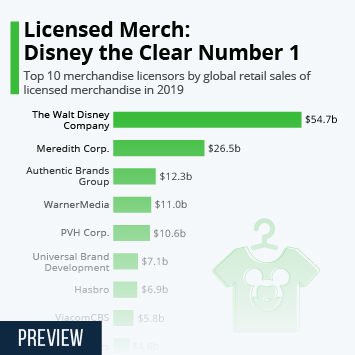 This chart shows the Top 10 merchandise licensors by global retail sales of licensed merchandise in 2019.