Nearly seven decades ago, Edmund Hillary and Tenzing Norgay reached the summit of Mount Everest, becoming the very first climbers to conquer the world’s tallest mountain. Since that incredible feat in May of 1953, the summit of Everest has become increasingly congested and rubbish-strewn.

While an earthquake in 2015 and the Covid-19 pandemic have interruputed activity on the mountain, more and more climbers have been reaching the summit in recent years thanks to advances in mountaineering equipment. Indeed, scaling Everest is becoming a lucrative business, with westerners forking over anywhere between $10,000 and $100,000 for permits to climb it. The following infographic uses data to show how scaling the mountain has increased in popularity, using data from the Himalayan Database.

The increasing number of climbers tackling Everest has resulted in immense gridlock and irritating waiting periods near the summit. The waiting periods are also fraught with danger, causing exhaustion, dehydration and death in some cases. In May 2019 alone, 11 people were killed on the mountain including climbers from India, Ireland, the UK and the United States. A photo taken by mountaineer Nirmal Purja went viral around that time showing a long line of climbers snaking up towards the summit.

The sheer volume of climbers has undoubtedly added to the danger. Attempts to reach a solution and protect amateur mountaineers have divided the climbing community. Proposals to install ladders on treacherous rock faces have angered professionals who do not want to see the challenge of Everest undermined. Until 1985, authorities in Nepal only permitted one expedition on a route to the summit at any one time. Reviving this rule may prove a realistic long-term solution to alleviate the Everest ‘traffic jam’.

Covid-19 has also brought another dimension to the current climbing season with Nepal urging climbers to bring back their empty oxygen bottles instead of discarding them on the mountain. The country had experienced severe oxygen shortages as it struggled to contain a crippling wave of infections. 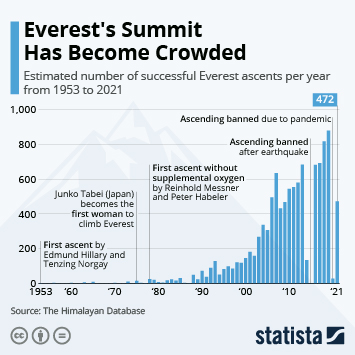 This infographic shows the estimated number of successful Everest ascents per year from 1953 to 2021.