The city of Richmond, Virginia, has said it would remove a statue of Confederate General Robert E. Lee “as soon as possible”, adding to what has now become a handful of concrete actions announced after days of widespread protest against racial injustice in the U.S.

The 21-foot statue (equals around 6 meters), which shows Lee sitting on a horse, is actually considered one of the most prominent Confederate monuments in the U.S., of which NGO Southern Poverty Law Center has counted 777 in August of 2019. This makes monuments the most common public symbol of the Confederacy in the U.S., closely followed by highways and roads named after Confederate generals and the like. Other symbols counted by the organization included the names of cities, counties, schools and buildings, but also holidays observed in some states, a scholarship, four colleges, ten military bases and several bodies of water.

Robert E. Lee is actually the most common Confederate to have a statue modelled after him, followed by Jefferson Davis and Thomas Jonathan "Stonewall" Jackson, according to the SPLC. Most Confederate symbols were counted in Virginia, followed by Texas and Georgia, but a total of 31 states have them.

Some cities and states have started to remove Confederate monuments in the past couple of years. The process was often met with controversy, as proponents see the dismantling of monuments as an adjustment of who deserves a public honor, while opponents see in it a dangerous reversal of history. Between the start of the SPLC tracking project in mid-2015 and August 2019, 119 Confederate symbols across the U.S. were removed. 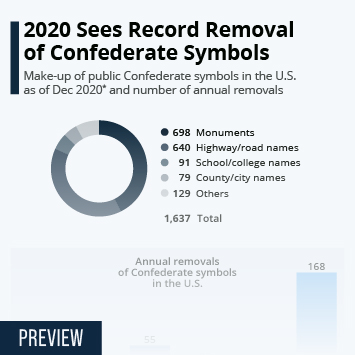 This chart shows the types of public symbols of the Confederacy most common in the U.S. and the development of the number of such symbols (as of August 2019).