88.9k
Today's mobile phones are much more than just phones. They are little computers with countless features and making phone calls is just one of those features. The time we spend interacting with our phones has steeply increased over the past few years. However, the time we spend actually talking on our phones is declining.

In the United States, where people spent more time talking on mobile phones than anywhere else, the number of outgoing voice minutes per subscriber declined more than 20 percent since its peak in 2007. Not coincidentally, 2007 was the year the first iPhone came out and changed the way we interact with our phones possibly forever.

As faster wireless networks enable us to use IP-based voice and messaging services such as Skype, Facetime and Whatsapp, wireless carriers have witnessed a decline in voice minutes, formerly their main source of revenue. As a consequence, many operators are now bundling telephony in their general access offers and users are no longer billed for the minutes, but rather for the amount of data they use.

In the United States and Canada, where unlimited call plans have been common for quite a while, people spend much more time talking on their phones than anywhere else. In 2011, mobile subscribers from the U.S. and Canada on average spent almost 6 hours per month on outgoing phone calls. That's almost three times as much as in the UK and more than four times as much as in Germany. It will be interesting to see how these numbers evolve over the next few years, as mobile phones increasingly replace land lines in many countries and smartphones continue to change the way we communicate. 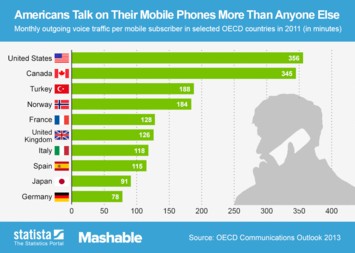 This chart shows how much people from selected OECD nations talk on their mobile phones per month.