Apple will hold a special (virtual) event on Tuesday, where it is widely expected to unveil new products for the upcoming holiday season. While the company’s September event is usually reserved for new iPhone models, this year’s presentation is reportedly all about the iPhone’s supporting cast, while the main act is expected to take the stage in October.

With press invites reading “time flies”, it is considered all but certain that Apple will present at least one new Apple Watch on Tuesday, with a second, entry-level model to succeed the Apple Watch Series 3 also widely expected. Other products rumored to be unveiled this week include Apple-branded over-ear headphones and Tile-like tracking devices that can be attached to keys, wallets or other valuables.

All of these products would likely fall into Apple’s “Wearables, Home and Accessories” segment (formerly known as “Other Products”), which has been growing rapidly over the past few years.Fueled by the success of Apple Watch and AirPods in particular, sales from the segment have nearly doubled between 2017 and 2019, with fiscal year 2020 sales likely to come close to $30 billion.

While the iPhone remains the largest driver of Apple’s sales, the company has successfully broadened its revenue base over the past few years. With iPhone sales peaking at almost 70 percent of the company’s total revenue in Q1 2018, Apple had become dangerously dependent on smartphone sales, especially considering the increasing maturity of the industry. Thanks to Apple Watch, AirPods and its growing services segment, Apple was able to reduce its reliance on iPhone sales quite significantly to less than 50 percent of total revenue in the two most recent quarters. 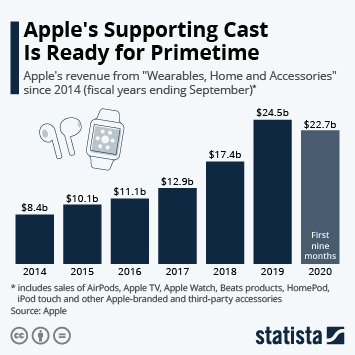 This chart shows Apple's revenue from "Wearables, Home and Accessories".