88.9k
Given the myriad of circumstances behind dog attacks, studies into fatal interactions between canines and humans have always courted controvery. In the mid 1990s, The Centers for Disease Control and Prevention conducted a study into the dog breeds involved in fatal U.S. attacks between 1979 and 1996. During that timeframe, the Pit Bull was identified as the breed/type of dog involved in 60 fatal attacks, while the Rottweiler was recorded in 29 and the German Shepherd was in 19.

Dog attacks still regularly make headlines today and according to research from a national victims' group dedicated to increasing awareness of the problem, the breeds responsible for most fatal attacks have remained the same. DogsBite.org compiled a 13-year fatality report idenftifying breeds of dogs involved in U.S. attacks from 2005 to 2017.

As can be seen from the following infographic, the Pit Bull is still the breed/type of dog responsible for the most fatal attacks with 284 incidents identified, 66 percent of the toal. The Rottweiler comes a distant second with 45 fatal attacks over those 13 years while the German Shepherd is third with 20. Surprisingly, some breeds which are not known for aggression, such as the Labrador Retriever, make the top-10 list with 9 attacks on record.

The average cost per claim for dog attacks has gone up 90 percent from 2003 to 2017, driven by increasing medical costs and higher settlements. Canine-inflicted injuries accounted for over a third of all homeowners' liability claim dollars paid out in 2017, costing nearly $700 million. As well hundreds of fatalities, dog attacks also resulted in 28,000 people having reconstructive surgery in the U.S. in 2015 while hospitalization stays went up 86 percent between 1993 and 2008. Today, the cost of a dog-bite related hospital stay in the U.S. is $18,200 . 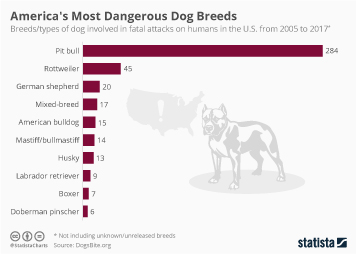 This chart shows breeds of dog involved in fatal attacks on humans in the U.S. from 2005 to 2017.