88.9k
Ever since the concept of creating machines that can operate autonomously exists, Japanese people have been fascinated by it. After the first mobile and perceptive robot was developed by a U.S. scientific research institute in Silicon Valley, Japanese scientists have been heavily involved in robotics engineering since the 1970s. While the word robot derives from the Czech word for “forced labor”, the real-world definition includes the notion of an intelligent, embodied machine that can move and perform tasks autonomously. As the robotics field has developed at a fast pace, it has spawned a wide range of types, which can be divided by shape, locomotion system, purpose and many more.

Japan is famous for creating innovative robots, illustrated by news spreading from Japan across the world about the newest inventions, such as sweating robots, robot dogs or AI robots helping school children to learn English. Although not as entertaining as these examples, industrial robots have become a crucial part of the workforce in the manufacturing sector and Japan represents one of the biggest markets for them worldwide. By performing tedious or dangerous tasks with far more precision and speed than humans, they have transformed the manufacturing industry and helped it stay competitive.

Yet, people in Japan don’t seem too optimistic about the technological progress. According to a Pew Research Center survey conducted in May and June 2018 about the likelihood of changes in society if robots do much of the work currently done by humans, about 83 percent of Japanese respondents thought that despite a much more efficient economy, the inequality between rich and poor would worsen. Similarly, the majority believed that ordinary people would have a hard time finding jobs and doubted that there would be better-paying jobs. With its ageing society and shrinking workforce, robots could be one solution for Japan to stay globally competitive. It must therefore find a way to create a society in which robots and humans can coexist and work together. 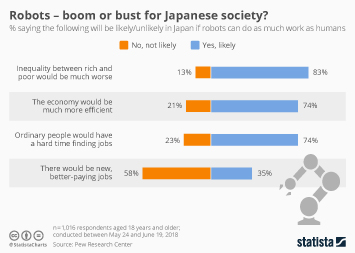 % saying the following will be likely/unlikely in Japan if robots can do as much work as humans.