Several of the world’s most valuable companies had humble beginnings as startups and were founded by influential entrepreneurs such as Steve Jobs, Elon Musk, and Mark Zuckerberg. A startup is a young company that has developed a unique business idea, aims to make an instant impact, and take over the market. Highly valued startups are known as unicorns, which is a reference to their elusiveness. China and the United States have the highest number of unicorns worldwide, but one of the most active regions for startups is Latin America. Meanwhile, a smaller percentage of the population of South Korea and India are involved in startups.

The most valuable startups worldwide

New startups get off the ground around the world every day. However, for each successful idea, there are thousands that fail. Highly valued startups are known as unicorns, which is a reference to their elusiveness. As of April 2021, the most valuable startup worldwide was the Chinese tech company Ant Group, previously known as Ant Financial. Most of the highest valued unicorns globally hail from either China or the United States. Although more than twice as many unicorns were headquartered in the U.S. as were in China, the highest valued Chinese unicorns were worth almost twice as much as their U.S. counterparts.

Which region has the most unicorn exits?

Once a unicorn goes public or is acquired, then it is no longer referred to as a unicorn and this process is called an exit. The number of North American unicorn exits has risen steadily year-on-year since 2014. However, the same cannot be said for unicorns from any other region. For instance, the peak of exits in the Asia-Pacific region occurred in 2018 before falling in subsequent years. In spite of the difference in volume of exits, the value of exits in North America and the Asia-Pacific region over the last decade and a half has remained high.
This text provides general information. Statista assumes no liability for the information given being complete or correct. Due to varying update cycles, statistics can display more up-to-date data than referenced in the text.
Published by Statista Research Department, Jun 2, 2022

Distribution of super startups focused on B2B and B2C worldwide 2020

Early-stage entrepreneurial activity in the Americas 2021, by country

Market value of unicorns worldwide as of April 2021, by region

Market value of unicorns worldwide as of April 2021, by industry 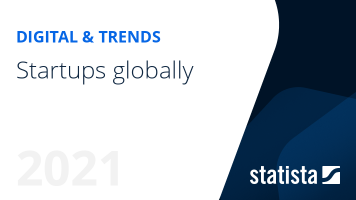 The most important key figures provide you with a compact summary of the topic of "Startups worldwide " and take you straight to the corresponding statistics.