88.9k
After a 300-million-mile journey lasting seven months, NASA's Mars InSight probe has finally landed safely on the surface of Mars. It slammed into the planet's atmosphere at over 12,000mph yesterday before descending to the Elysium Planitia, a large lava plain near the Martian equator. Costing $814 million, the lander will use its onboard instruments to study Mars' core, crust and mantle to help scientists learn more about its origins.

The InSight's landing was an extremely tense affair for everyone involved and NASA descibed the process as "seven minutes of terror". Cheers erupted in mission control when it emerged that the probe survived its descent to the red planet. Given the high failure rate of previous missions, NASA can be proud of its accomplishment. Whether it was an orbit around Mars, a flyby or landing a spacecraft on the surface of Mars, 40 percent of previous trips have ended in failure.

The following infographic uses a historical log maintained by NASA to show how many Mars mission were successful since 1960. The USSR suffered failure on its first five missions for several reasons such as the spacecraft breaking apart or radio/communication problems. The U.S. had its first successful mission in 1964 and since then, NASA has enjoyed immense success with its trips to Mars. 16 of its 22 missions were successful while the USSR/Russia have seen 15 of their 18 missions end badly.

The success rate since 2000 certainly gives hope to NASA and other space agencies/organizations dreaming of undertaking the ultimate trip to Mars - sending humans to the red planet and bringing them back safely. 12 missions have been undertaken in the 21st century and only one of them ended in outright failure. 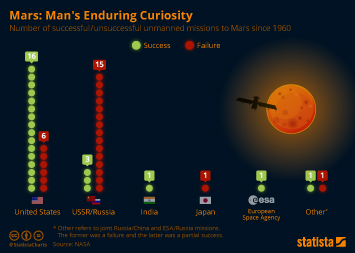 This chart shows the number of successful/unsuccessful unmanned missions to Mars since 1960.