Today marks World AIDS Day, which aims to promote awareness of the disease and mourn those who have died from it. The event came into existence in 1988 and it has been widely observed by health officials, governments and non-governmental organizations since then.

HIV affects more than 2.3 million people in the World Health Organization’s (WHO) defined European Region, particularly in the Eastern countries. According to the WHO, the European Region stretches from the "western shores of Greenland to the Pacific shores of the Russian Federation, and from the Mediterranean to the Baltic Sea." The following chart shows the number of new HIV diagnoses per 100,000 people in 2021, using data from the latest WHO and the European Centre for Disease Prevention and Control (ECDC) annual report. 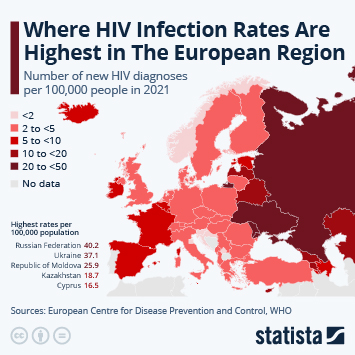