In the speech, Macron announced measures to boost wages including, a government bonus scheme for low-wage earners, an end to taxes on overtime pay, removal of a surcharge on most pensions, and business incentives to give tax-free bonuses to staff. The protests, which began on November 17th as a resistance to a fuel tax, quickly escalated into anti-government demonstrations and critiques of inequality across the country.

The Yellow Vest movement has put the French President in political jeopardy as he is often portrayed as an aloof advocate of the rich and powerful, disconnected from the plight of the everyday Frenchmen. Macron did not help this image, giving his speech from behind a gold desk in a gold room in the Élysée Palace, the presidential residence. 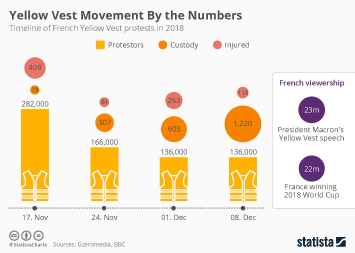 This chart shows a timeline of the French Yellow Vest protests in 2018.